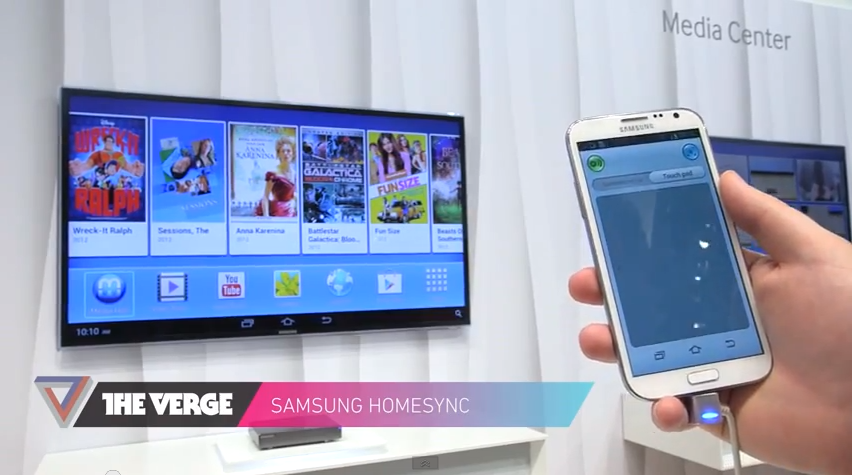 The Samsung vs. Apple battle that has long raged over several continents and in many courthouses will shortly expand into a new territory: your living room. Samsung all but declared war on Apple at the Mobile World Congress with the announcement of its HomeSync media streaming box. The invasion of this newest frontier is set for April 2013 in the US.

Unlike Apple’s lightweight, streaming-only black box, this beast is part “Google TV”, part Boxee, packing a hefty 1TB hard drive that will be running Android’s Jelly Bean OS (version unspecified) and have access to the Google Play store in order to outdo the current availability of apps on the Apple TV.

Samsung is beating Apple to the punch — at least through usability and technological might —  by allowing its users to push apps, games, and other media (such as movies and browsers) directly to the TV from a computer or mobile device (*cough Samsung phones, cough*). The device’s spec sheet boasts an impressive 1.7 GHz Dual-core processor, 8GB SSD and 1 GB of RAM, as well as its 1080p HDMI 1.4 connection, USB 3.0 port, optical audio out, Bluetooth 4.0, Ethernet port and Wi-Fi. But there’s no word yet on pricing so the collateral damage on your wallet could leave a massive dent in your budget.

Interestingly enough, specs aside, this little box could almost be seen as a full “TV PC” based on the fact that it’ll allow up to 8 unique profiles to be set up and divide the storage space, all fully protected by password encryption.

Wanna see it in action to compare? Our buddies at the Verge got their hands all over it for a quick test drive.