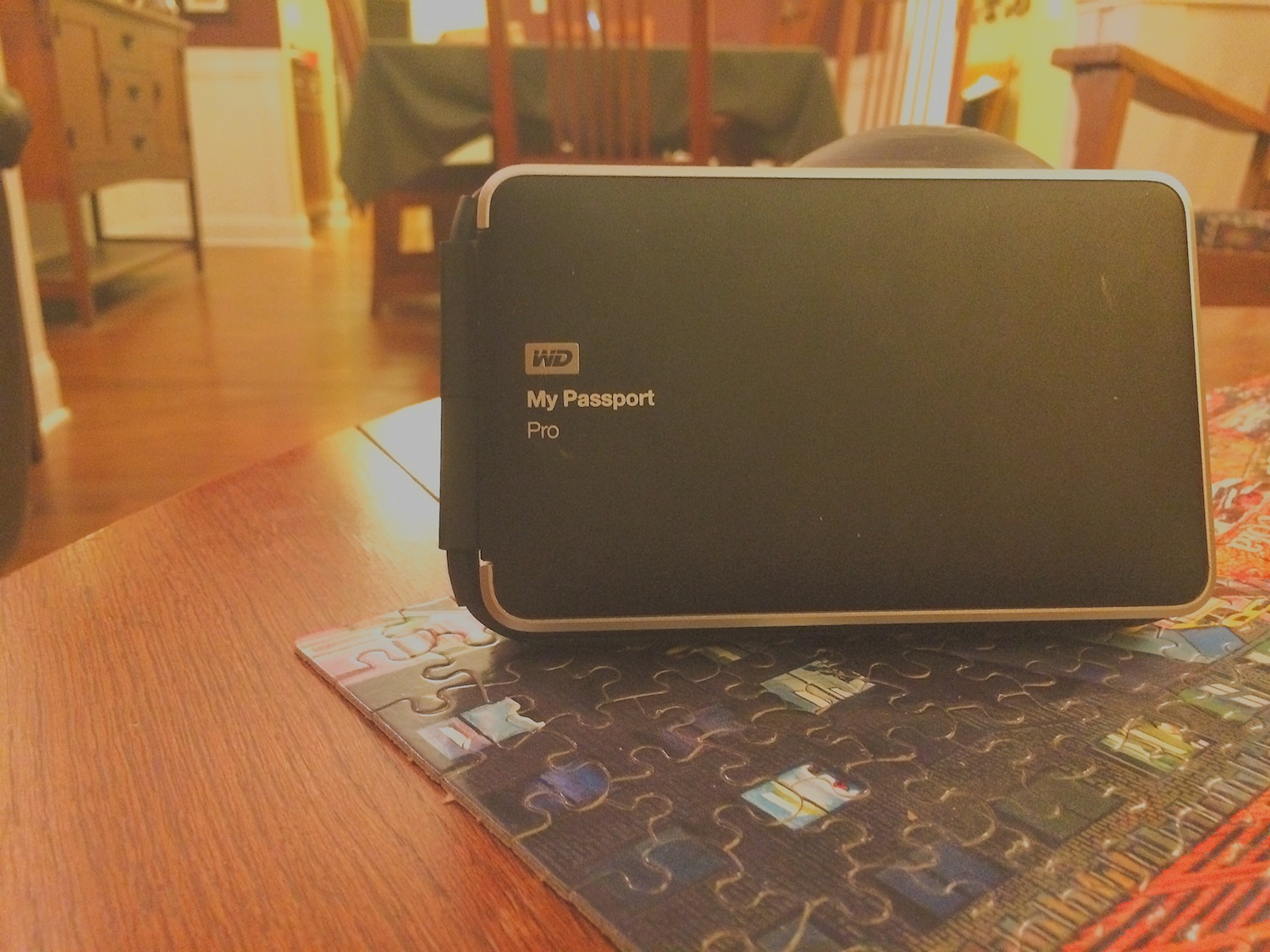 I’ve wanted to get an external Thunderbolt drive for quite some time, but I’ve also wanted something portable that doesn’t require an external power source. My options were pretty limited, that is, until I found the My Passport Pro by Western Digital at Macworld 2014. This drive is one of the latest additions to Western Digital’s portable hard drive lineup and their highest performing drive.

Note: For this review, I was using a 2TB My Passport Pro in a RAID 0 setup on an early-2013 MacBook Pro with Retina Display. As far as drive speeds go, I found the drive more than adequate for backups and large file transfers. When running a 1GB Blackmagic Speed Test on the drive in a RAID 0 configuration, I clocked speeds of up to 212MB/s write and 217.9MB/s read with an overall score of 186.2MB/s write and 167MB/s read, making high-resolution video editing a breeze on the drive. By comparison, an off-brand 5400RPM, USB 2.0 drive I have brought in speeds of only 35MB/s write and 38MB/s read. Yeah, Thunderbolt is pretty damn fast.

Design-wise, the My Passport Pro is a beautiful external drive, but it has its flaws. On the bright side, the drive’s exterior is crafted from smooth aluminum and plastic that both looks nice and is scratch-resistant, something important when working on-the-go out of a backpack. Another nice feature of the My Passport Pro is the fact that the Thunderbolt cable is built into the drive itself. This means that, unlike other Thunderbolt drives, you don’t have to purchase a $49 cable to use your new hard drive. Additionally, a Western Digital representative tells me that this makes the transfer speeds somewhat faster as data doesn’t have to travel through an external cable. When not in use, the cable wraps around the side of the device, making for quick and easy storage. Now for the downsides of the design: the plastic feet are terrible, and there is no way to replace the Thunderbolt cable. On the plastic feet side of things, I had two of the four feet fall off of the bottom of the device after a month of use. This is completely unacceptable for an external hard-drive that start’s at $299.99. Additionally, if your My Passport Pro’s Thunderbolt cable ever fails, you’re completely screwed as there’s no way to replace it. No send-in program, nothing. These two things are something I’d like to see Western Digital address in the near future.

All-in-all, I can recommend the My Passport Pro to any mobile professional who needs a seriously fast portable RAID setup for video editing, backups, or photo editing. However, if you’re just looking for a drive to backup to with Time Machine, you’re probably better off using a cheaper USB 3.0 or Firewire 800 alternative. You’ll save yourself a nice chunk of change.