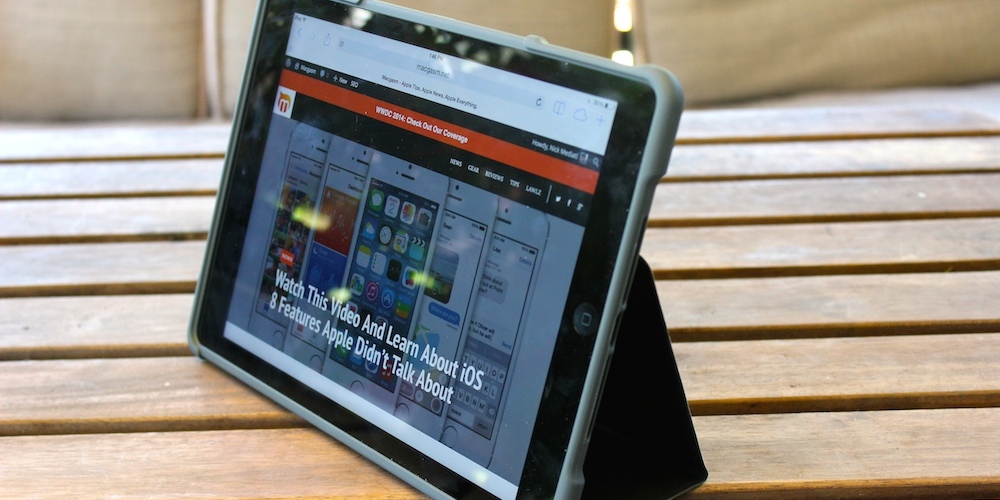 STM prides itself on making durable, we’ll-crafted products Case in point: I’ve owned an STM Sphere laptop bag since 2006, and despite a torn mesh pocket on the front, it’s held up quite well. In fact, it’s still my everyday laptop bag. So I was curious to see whether or not the same would hold true with STM’s Dux case for iPad Air (available from RadTech for $49.99). Ultimately, the Dux is well constructed, but a few annoyances detract from the overall experience.

The Dux is a ruggedized case that provides fairly complete protection for your iPad, with a shell enclosing the tablet and a lightweight fold-over cover protecting the screen from scratches. The back shell is a hard, clear plastic, while a semi-rigid plastic ring holds your iPad in place and protects the corners from bumps and drops. The clear plastic backing lets the iPad’s industrial design—or your own custom design—peek through, but it seems like the sort of material that would get scuffed up in regular use (better the case than the iPad, I guess!). The Dux adds some bulk to your iPad, mostly in terms of thickness—especially if you have the cover folded back. With the cover folded back, the case is about triple the thickness of the iPad Air itself. Since the cover sits flush with the edges of the rear shell when closed, the Dux as about twice the thickness of the Air when the screen is covered. How big a deal this is is a matter of personal preference, though, especially since you may find the added heft gives you the feeling of a more secure grip when you carry your iPad around.

In terms of width, the Dux adds about a quarter inch of girth to your iPad. The extra quarter inch didn’t affect my ability to thumb-type on the iPad while in portrait mode, but if you already struggle to thumb-type on an iPad Air, that quarter of an inch won’t help you any. Also, the case weighs about .66 pounds, so it will add considerable weight back to the one-pound Air.

With its utilitarian gray plastic, the Dux isn’t the prettiest case in the world, but then again, looks aren’t STM’s top priority here. Durability is. STM says the case meets US Department of Defense 810F/G durability standards for, and can withstand drops from 6.6 feet. Fortunately for my iPad, I didn’t have an opportunity to test this claim with the review unit STM provided to me.

The protective shell does have some drawbacks–most notably the design makes it difficult to press the volume and sleep/wake buttons on the iPad.

The screen cover is similar to what you’ll find on Apple’s Smart Cover: It’s a thin, stiff cover with microfiber lining in the screen side and a flexible crease point that lets you fold the cover and use it as a stand of sorts while you use your iPad in landscape mode. I used the makeshift fold-over stand both at a typing angle and at a “picture frame” angle which places the iPad in an upright position, and of the two, the typing angle is much more stable. If you press too hard on your iPad while the Dux In the upright stand configuration, the cover can slip out of position and cause the iPad to tumble backwards. The Dux has a pair of nubs that help prevent the back cover from slipping out of place when used as a stand, and it helps to some extent, but I was still able to knock it over with enough force.

Most cases with covers that double as stands have similar stability issues, so I can’t fault STM entirely on this point, but some slightly larger nubs would help make the Dux more stable when used as a stand.

The microfiber material on the cover is nice and soft, though, and the wrap-around magnetic flap keeps the cover nicely secured when it’s closed. The flap is can be a little tricky to grasp without fingernails, so it’d be nice to see STM add in a little pull-tab to make the cover easier to open. Also, the cover is not removable, so it can get in the way sometimes, but you can fold the cover around the back easily and secure it to the back of the case with the magnetic flap.

We don’t have a ratings scale here at Macgasm, but if I were to go off of the standard five-star scale, I’d give the Dux a solid four stars. It’s a very good case overall, and gets points on its build quality. I would like to see STM make a few tweaks to improve the case’s stability when used as a stand, and to address a few other minor issues. But as far as iPad cases go, you can do a lot worse than the STM Dux.