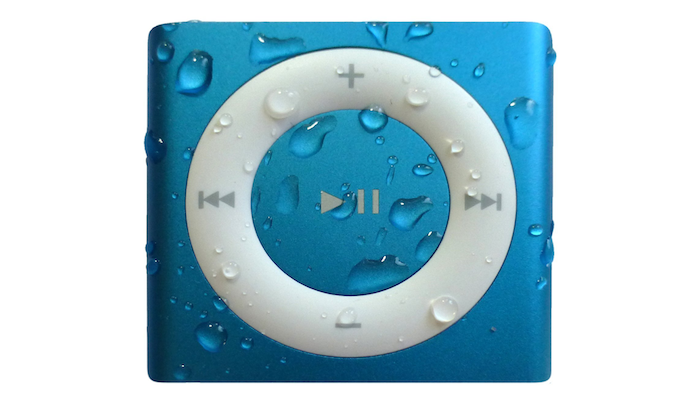 Waterproof things are great because, from messenger bags to iPhone cases, they can really save our asses when stuck in the rain. And aside from just protecting us in the rain, competitive cyclists, swimmers, and other athletes use waterproof technology to listen to music, while  keeping their  devices free of damage from sweat and water, amongst other sporty things.However, using an iPhone in a waterproof case isn’t practical for cycling or swimming due to being bulky and in-the-way. However, the folks at Underwater Audio have recently come up with an interesting solution: waterproof Apple’s humble iPod Shuffle. The company offers both a send-in service for exiting devices, and a new device purchase program.

The device itself has waterproofed openings and buttons, meaning that anywhere that water could possibly seep into the device has been sealed off. This allows the iPods internals to remain nice and dry when submerged. However, the iPod’s exterior looks to have been left alone due to the fact that, if submerged, it doesn’t have any affect on the iPod’s functionality. This is nice because you can still feel the aluminum shell of the iPod, not a reflective plastic coating.

The only downfall to the iPod’s waterproofing is the fact that the iPod’s buttons and switches are a little bit hard to press due to the waterproof coating. When comparing my Underwater Audio iPod Shuffle to my standard, non-waterproofed iPod, I noticed that the buttons on the Underwater iPod didn’t click or provide any feedback, but still worked. It almost feels as if you got something stuck under the button. Nevertheless, the buttons still work flawlessly.

Aside from the buttons being waterproofed, the rest of the iPod Shuffle is the same as any other. It has no screen, 2GB of storage, and comes in a variety of different colors. The iPod is controlled by a simple circle of controls and a switch that lets you toggle between a shuffled music library and a standard, in-order library. You can also toggle between playlists using the center button on the top of the iPod.

All in all, I think Underwater’s iPod Shuffle definitely worth the $149 if you’re in a position where you need a completely waterproofed iPod. The only thing I would like to see changed about the device is the fact that there isn’t a pair of waterproof headphones included with the iPod. As of now, these can be purchased separately from Underwater Audio.