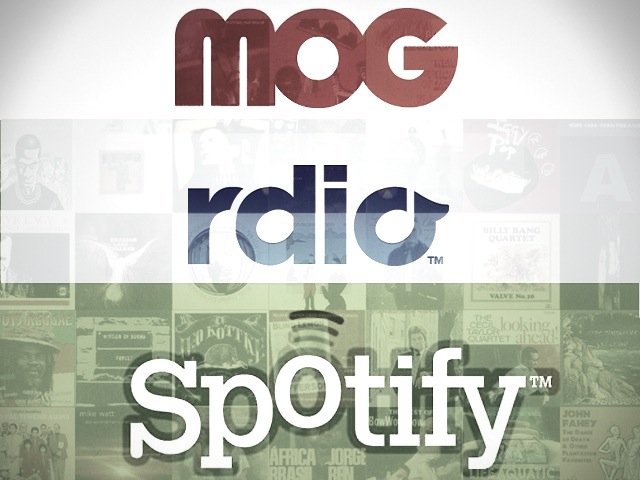 I love listening to music across a wide variety of devices such as my iPad, iPhone and Macs. The only problem with listening to so much music is the price. Since iTunes charges up to $1.29 per song, buying music can end up being a pretty pricey habit. This is where subscription music services come in. These services give you the benefit of listening to unlimited music for a monthly fee. While you don’t actually own the music, most services allow you to save your collection to your mobile device for offline listening.

While there are a ton of music subscription services on the net, I’ve chosen three to compare in the article below: Rdio, MOG and, the most popular, Spotify. These services are all unique in their own way by providing different plans, music selection and mobile apps. I’ve been an Rdio Unlimited member since December 2010. This is mainly because I’ve had no problems with their service and they continue to expand their music library by constantly adding new record labels.

Rdio’s iPad app is absolutely stunning. I’ll even go far enough to say that it looks better than Apple’s standard Music app. This is because of its stellar interface, which uses a combination of dark blues and grays. The application also performs well on my new iPad and I recall it working fine on my iPad 2.

The iPhone app, on the other hand, is definitely less than desirable. It reminds me of the old Facebook app because of its “grid-like” interface, which is just plain clunky and annoying. The app is extremely unstable as well. We can only hope that Rdio updates this app in the near future.

Rdio, like most streaming services, offers three pricing tiers. Their free service gives you ad-free listening, but only allows you to listen to a few songs a day. Their $5 per month plan offers unlimited desktop streaming while Rdio’s $10 per month unlimited plan offers unlimited mobile and desktop streaming. Unlike MOG and Spotify, Rdio also offers a $17.99 per month Family Unlimited plan. This plan includes two separate unlimited streaming plans and saves you two bucks a month. Need three accounts? Rdio will hook you up for $22.99 per month.

Families and heavy iPad users definitely want to choose Rdio over MOG and Spotify as it features the best family pricing and iPad app. Rdio also supports a plethora of other mobile operating systems such as Windows Phone 7, Blackberry OS and Android. While Spotify has been available in Europe for years, it just recently launched in the United States (and not in Canada). While I don’t have experience with their premium service, I have tried their free service, which is decent. They do seem to have a smaller selection of electronic music, which is why I’m not switching from Rdio.

Spotify has just recently launched their iPad app, which includes Retina graphics and an OK user interface. While it looks nice from the get-go, I think it’s cluttered compared to Rdio’s app.

Spotify’s Mac app looks nice and features a ton of Facebook integration. For instance, you can see your Facebook friends’ Spotify activity in the sidebar of the Mac app at all times. While this is a nice feature to have, it may get a bit distracting.

Spotify’s iPhone app looks absolutely stunning and features a ton of added functionality over Rdio and MOG’s iPhone app. For instance, you can double-tap on a song to bring up a row of functions, just like in Tweetbot.

Spotify features similar plans to Rdio. Their free service is ad-supported and has limited listening while $5 per month will buy you unlimited desktop streaming. Their “Premium” plan is $10 per month and allows you to stream unlimited music to your computer or mobile device. Spotify currently offers apps for iOS, Blackberry OS, Windows Phone 7, WebOS, Symbian and Android. MOG is the audiophile’s dream streaming service. This is because it offers streaming at up to 320kbps, which beats the 128kbps streaming quality on Spotify and Rdio.

MOG’s iPad app, to me, is pretty bland and ugly. It features a very dark interface, which can definitely get old after a while. The controls aren’t very intuitive when compared to Spotify or Rdio’s application.

I’m also not a fan of MOG’s iPhone app as it seems unfinished. This is because the user interface seems boring and the application feels very unorganized, as there is no clear homescreen.

What Do You Think?

If you can’t tell already, I prefer using Rdio to stream my music. But now that you’ve heard my opinion, what service do you use to stream your digital content? Or are you sticking to good ol’ iTunes for your music? Let us know in the comments section below!