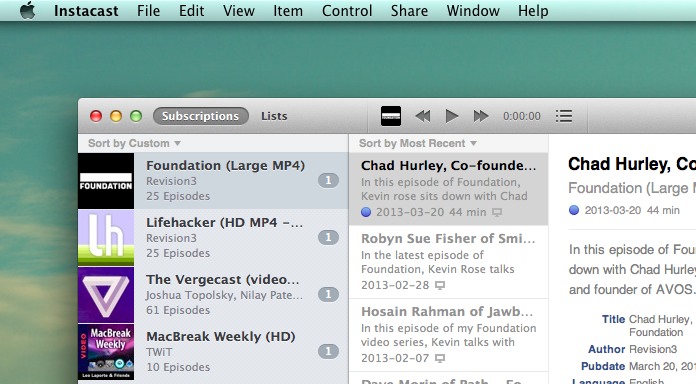 I love listening to podcasts. When I heard that my favorite iOS podcast client, Instacast, was making a Mac app, it brought me probably a little too much joy. The beta period for Instacast has expired and the full version of the application has just shipped. Now that it’s officially a 1.0 product, the question remains: is it worth the money ($19.99) its creator Vemedio is charging?

Instacast for iOS is an easy to use podcasting app, and Vemedio brought over many of the features from the mobile version of the app to its Mac app. You can customize the settings of each podcast you subscribe to in-depth, including how often a podcast series downloads, as well as refresh settings. You can create smart lists that collect podcasts that are downloaded or partially played, or just make a playlist of podcasts you want to listen to later.

There is also a directory of podcasts that are broken down by Audio, Video, Enhanced (podcasts that have extra features, like bookmarks, images, URLs, and so on), and Genres. You can also search for podcasts by name or add them by URL. It is very handy to have the directory built into the app.

The interface for the app is simple and easy to use. Subscribed podcasts are located on the left side, and next to that is the episodes of the selected episodes. Show notes are shown in a big pane on the right side. The playback buttons are located on the top-middle portion of the window.

You can share a podcast to a few different services, which include App.net, iMessage, Mail, Pocket, and Readability. Flattr is also included for supporting the creators of content.

Since I subscribe and listen to tons of podcasts, finding issues with the app isn’t usually too much of a problem. There are multiple syncing issues that occurred when I was setting up the application to sync with my iOS apps. When I subscribe to a podcast series on either iOS or OS X, it doesn’t show up on the other device. I have to manually add it.

Also, position sync works from Mac to iOS, but not the other way around. Plus, deleting the podcast on the iOS device did not delete it on the Mac. If you’re consuming your content on one device, you won’t notice much of a problem, but if you’re syncing between devices this can be a bit of a non-starter.

This is clearly a 1.0 product. The main issue with the app is the syncing. If that can be fixed in short order, Instacast for Mac will continue to be my go to podcast consumption app of choice. Until then, I will be sticking with just the iOS app.

Instacast for Mac is available for $19.99 from Vemedio’s website.