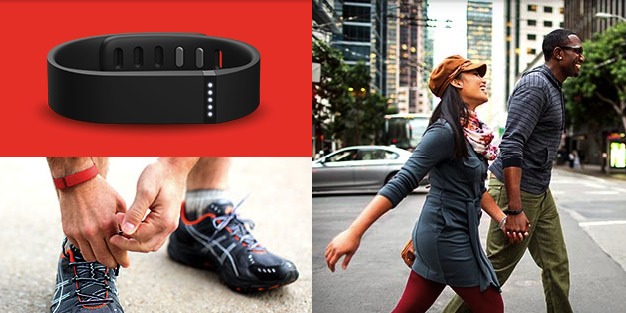 I’ll admit it: I need to lose weight. There, I said it. Luckily for me my love of technology can help me reach my goal. One such gadget that makes it a little easier to lose weight is the new wrist strap fitness tracker called the Fitbit Flex. Will it change my behaviors and help me lose weight? I guess it’s time to find out.

Initially, things didn’t go too smoothly. The Fitbit Flex left me with a bad first impression, which surprised me considering I’d heard such good things about the Flex. The first issue that I encountered was some bizarre trouble with pairing the Flex with my iPhone. Pairing it allows users to sync data to the Fitbit app. No matter what I did it would not pair. Luckily restarting the app got the pairing to work. Afterwards, it was hard to use the clasp to secure the wrist strap on my arm. Eventually I got it clasped together and it was quite secure on my wrist.

My problems didn’t end there though. The next issue was that the Flex counted 18 steps before I even got up and shook my tail feathers around the room. Apparently the device was counting my arm movements as steps. Probably not a bad thing if you prefer chicken dancing to actually walking for your exercise. If that’s the case, this may be more feature than bug.

Once I got those problems out of the way, I began using the device quite a bit. The Flex was quite comfortable to wear and was not stiff like the Flex’s competitors (Fuelband, etc.) that I have used previously. It’s easier to remember to wear a strap because it’s on you all the time and there’s not going to be a chance of leaving it in your pocket like the Striiv Play when you switch or wash pants. The main reason to take the Flex off is for charging. The strap is better for sleep tracking compared to the companies clip-on fitness tracker the Fitbit One, which needs to be taken out of its clip and put into an armband. Who wants to do that? I mean, seriously? The accuracy of the steps, besides the arm moving issue I previously mentioned, was quite good. It missed very few of my steps. It even does a better job than my Nike+ Fuelband, which misses tons of steps in comparison during my rudimentary tests. It doesn’t seem to have as good of accuracy as the Fitbit One though.

The app is great. Besides steps, it shows distance traveled, calories burned, hours slept, and quality of sleep. You can enter in the amount of water you drank on a given day, food intake, and your weight and body fat (either manually or you can have it synced with the Fitbit Aria Wi-Fi scale).

There are other problems with the Flex though. It lacks a display on it like the Fitbit One and Nike+ Fuelband, so the app needs to be used to get any informetrics out of the wrist strap. There’s a tiny display that does show dots with how much progress you have made, but it’s not very informative.

The Flex is not waterproof and is only water resistant. Long story short, no swimming. Showers are okay though, and dish duty should be fine, unless you’re looking for an excuse to get out of doing them. If that’s the case, this thing will die, die, die in a sink full of water.

The battery life is okay. On a full charge it should last you 5 to 7 days. Though it’s a very small device and may not be feasible, I would like to have seen it last quite a bit longer.

The Fitbit Flex is a solid device, but there are better fitness trackers out there, such as the Fitbit One, that run in direct competition to the Flex. The Fitbit One has more features, such as measuring the number of stairs climbed, and does a better job with accuracy.

The device has some shortcomings, but it’s not all bad. I have lost a little bit of weight while wearing the device over the past couple of weeks, and I feel more motivated to do extra things to reach my quotas. The Fitbit Flex comes in either black or slate for $100.00. You can also purchase different straps for the Flex if you’re looking to change the style up a little bit.