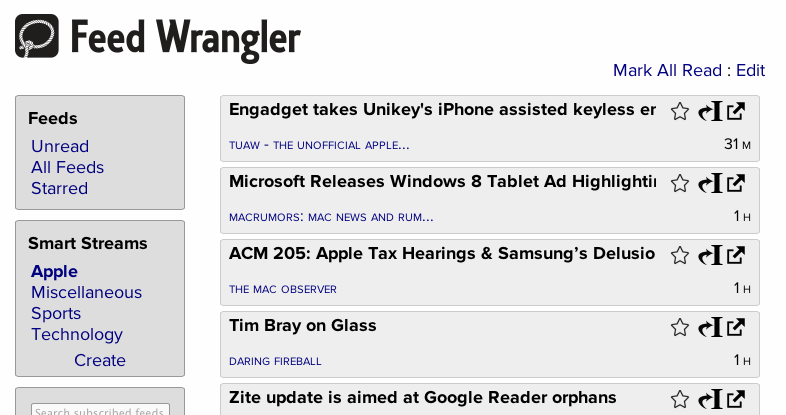 Google Reader is going away in July. There are many products coming out to fill the void. One such product is Feed Wrangler by the indie iOS and Mac developer David Smith. Will Feed Wrangler meet the needs of RSS users?

After purchasing a yearlong subscription for $19, I imported my feeds from Google Reader. One problem right off the bat is that Feed Wrangler does not import your groups. Instead, you have to manually sort them into Feed Wrangler’s version of groups called “Smart Streams”. Your feeds are separated by groups, but are seen as a stream of content.

The look of Feed Wrangler is basic. It has no frills, but this can be seen as a good thing, as the design is simple and does not get in your way. It is definitely a nicer interface than Google Reader but without the clutter.

There is a free iOS app that works once you have an account with a subscription. The app acts similarly to the site, but also has the option to see the content of each individual feed. An article can be viewed in the app via a mobilizer text-only view or an in-app browser, but cannot be opened in Safari or Chrome. One of the nicer things about the app is that it syncs between devices and syncs with articles you have queued up in Instapaper or Pocket.

Filters, available in Feed Wrangler, are a nice option to have and they’re not in other RSS reader sites that I have seen to date. Filters allow you to mark items as read automatically when they match a search term. This helps to reduce the number of unwanted articles in your feeds. If you’re a newsy this helps eliminate a lot of the echo chamber.

There are a few issues with Feed Wrangler. There are no unread counts, so you have no way of easily knowing how many articles you have to read. Also, only the most recent articles are shown, which is different from Google Reader that goes much further back in a feed’s history to show articles.

Managing feeds can be a pain too, unfortunately. There is no bulk delete of feeds, so you have to unsubscribe from feeds one by one. This is certainly a pain for someone like me that has over 100 feeds and needs to delete many feeds that are no longer useful or have not been updated in a while.

Also, even though I have RSS feeds that worked with other RSS reader sites, Feed Wrangler did not import all my feeds, saying, “No feed was found”. This is certainly frustrating as it is important for me to see all my feeds that I enjoy.

Will Feed Wrangler satisfy users? Some people will be satisfied with this solid product, but it definitely feels like a 1.0 release. The current negatives are deal breakers for me, and without Reeder support it makes it an even tougher sell.

There is an API that will be released, so hopefully Reeder ends up supporting Feed Wrangler. There is also a Mac app coming out for Feed Wrangler, but that will not be this site’s saving grace. The problems with the service are repairable and can be remedied in the future. For now, there are other free and paid options for people to try out, including Feedbin, Feedly, Fever, and The Old Reader.