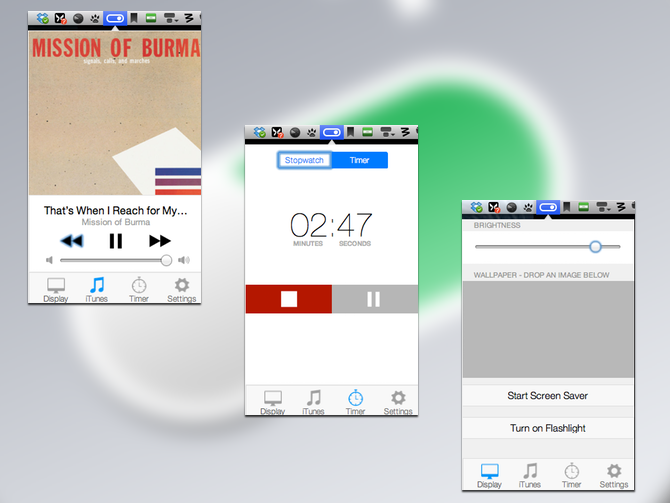 Though you’re all likely enjoying the fruits of installing Mavericks, it doesn’t quite have nearly the new toys that iOS7 has. I think that most people would probably argue that Control Center was the biggest goodie in terms of ease of use for iOS. However, where are the super easy controls for OS X? Controls+ tries to do something similar, giving you access to brightness controls, quick-on screensaver, a flashlight function (for some reason), iTunes album art and play controls, a stopwatch, and a timer. Granted, this isn’t as powerful as Control Center, but you get pretty quick access to many of its controls in the menu bar with Controls+.

That isn’t to say that it’s perfect. The brightness controls only work on your primary monitor. Not to mention that the flashlight function is just as easily accomplished by opening a full screen instance of Text Edit. However, it is a nice start and combines more than a few different menu bar utilities. You can change your wallpaper quickly, which is a pretty handy shortcut. It could also use a better API for its now playing feature, where it could step in and control Downcast or Spotify.

What Sucks: Missing a few features, and brightness only controls one of two screens.

Buy it?: So it may not be a complete Control Center emulator, but it is a handy app that can save a lot of space on your menu bar.