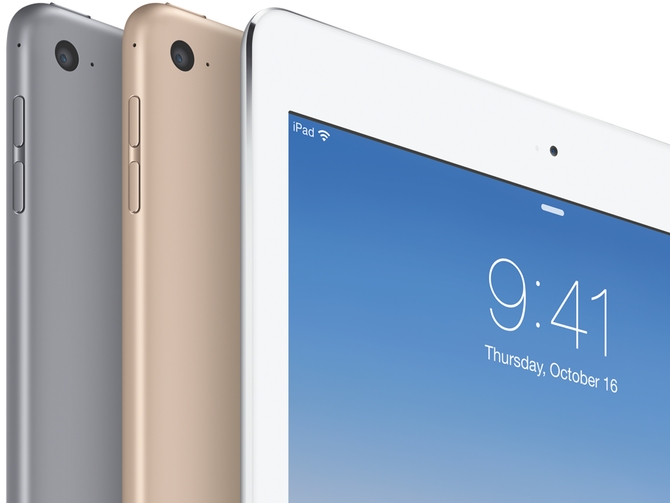 I am an unapologetic iPad lover. I bought in from the very beginning, even scoring an IT job supporting the early days of the iPad in the enterprise. I had the first iPad, the Retina iPad (i.e. the clothes iron with a screen and 30-pin connector), and the first iPad Mini. And recently, I got the new iPad Air 2.

I’m not a serial updater. I keep my phones on an every-other-year upgrade cycle, and all my Macs are more than a few years old. But I will say is that, for me, the new iPad was really worth the upgrade.

I had ditched the Retina iPad a few months ago: It was hot and the battery life began to suck. And so the Mini, which I used mostly used as an e-reader, became my only iPad. Its compact size was nice, but not essential. I found that it was underpowered for games. After weighing my options at the Apple Store, I decided the full-sized iPad Air 2 was so light that the extra screen size didn’t matter.

So now I have an iPad Air 2 sitting on my desk, and I’ve been using it for about a month now. It’s light and fits the same reading niche the Mini did, but it’s also great at running games. If you’re sitting with an iPad 2 or 3 that’s limping along, you should upgrade. It’s totally worth it.

Touch ID is the stand-out feature of the new iPad. It will improve your digital security overnight. Add a password to your device, and you’ll further lock down apps that have your personal data. It’s a great feature, but I am not sure how many iPads it will sell. It does make managing passwords with Last Pass really easy, though, especially with the new extension in iOS 8.

The battery life is excellent. I have yet to run this thing’s battery down below 30 percent, even when playing a bunch of games all night. This makes the iPad Air 2 an all-day machine, even with heavy use. That alone should sell everyone with an aging iPad on upgrading.

Which made me wonder about all of the lukewarm reviews that I have seen. Everyone is saying that Touch ID is great, but that overall there’s nothing to get really excited about. I can get what they’re saying. No one is writing reviews about how boring the recent upgrades to the MacBook Air are. Apps like Pixelmator are showing the iPad really can be as useful as your laptop. However, I can’t upload any files via the Web browser that aren’t photos. While third-party developers and power users are more than willing to expand what you can do with the iPad, Apple is absent on that front. No one wants OS X on the iPad, but we would like to get more than just some special gestures over the iPhone.

What the new iPad Air 2 shows is that the tablet scene is a mature market that continues to take steps forward technologically, but the revolution is over. Apple could kick-start it by aggressively expanding iOS’s functionality on the iPad. But that’s another article entirely. But I will reiterate: This is a good upgrade for people coming in from the iPad 1, 2, 3, or 4. iPad Air users will really want to weigh if Touch ID and an additional gigbyte of memory are worth the expense of upgrading. The hardware shows a maturity in the design, and hints at a more powerful future for the line. Hopefully that isn’t all in vain.

7 Best Duplicate File Finders for Mac to Use in 2021