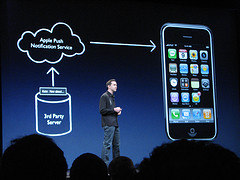 The self imposed deadline was September of 2008. Â When the deadline began to slide people started speculating that we would see push notifications in the 2.2 firmware update for the iPhone. September turned to November, November turned to January, and here we are with nothing left to go on, but speculation. Where did our push notifications go, and more importantly, will we be seeing it any time in the future?

You might be wondering what push notification is at this point. Â Push notifications is a technology that would allow applications on your iPhone to get updates from a server while the phone is in sleep mode or inactive, or more importantly, while you’re using another application on the phone.

If history is any indication, and past failures provide any insight into Apple’s release schedules, we know that they’ve jumped the gun on releasing products before they’re fully operational. Â I’ve speculated that this was a primary reason for Apple Inc. leaving Macworld behind in the past, and have a sneaking suspicion that they’re a little more gun shy this time around. Â Does Apple really need another failed launch?

Conspiracies are starting to pile up, and they range from the complete asinine to faulty logic. Â My favourite one is that push notifications kill battery life, and given the state of the current iPhone battery issues, it’s unlikely that push notifications would ever work. Â They say it’s a great concept in “theory”, and that Apple didn’t think the technology through completely.

I get a hearty chuckle out of that argument from journalists. Â They should clearly spend some time watching the WWDC keynote from ’08 again. Â Scott Forstall spends a great deal of time explaining the reasons why Apple is developing the push notifications. Â The primary reason? Stopping applications from having to run on the phone constantly and eating up all of our precious battery life. Â Programs running in the background constantly to get your updates will eat up your battery life…getting push notifications…not so much.

The second major conspiracy theory abound on the internet is a pretty huge broken record, but hold more water than that other “theory” I mentioned. Â AT&T. If you can’t guess what I’m about to write, you clearly haven’t been paying attention to the state of cellphones and service providers. Â Push notifications mean that more data needs to be pushed across the network. It means that text messaging plans are slowly being rendered useless. Â It means that the AT&Ts and Rogers of the world could be getting a look at a new revenue model. Â There’s no hard evidence to indicate that the Telcos are the ones holding up the push notifications, but it’s certainly a possibility worth exploring. If we can’t get tethering from them, why would we get push notifications?

Scientists have a saying that can easily be applied to the technology sector. The simplest explanation is usually the correct explanation. Â The simpliest answer–It’s still not ready for the primetime, and instead of having a mobile me Â 2.0 situation on their hands, they’ve decided to hold onto it until they can make sure it’s bug free and ready for consumption.

I’m always ready to listen to conspiracy theories, but I have a hard time seeing how they apply in this case. But I still want to know, like the rest of you, where the hell is my push notifications, and when can I expect to get them?