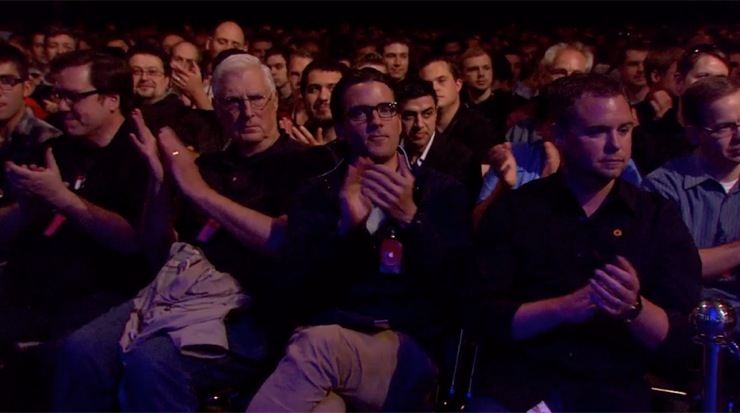 Every year there is excitement about what Apple will announce at their WWDC keynote. Yesterday, the company announced some great new updates to OS X, some Mac hardware, and  huge iOS update.  Here’s a giant recap in case you missed all the news yesterday and don’t have time to go digging through a billion posts to find the information. If you’d like to read more information than what we’ve provided here in the post, the link will take you to our more in depth articles on each topic.

Apple usually starts off their event with providing stats, and today was no different. Some of the most impressive stats that the company include in its keynote include: Apple has paid $10 billion dollars to developers and, there are currently 900,000 apps in the App Store.

One goal that Apple announced last year was yearly OS X updates. Today, they showed off OS X Mavericks and some of its improvements. Instead of having multiple windows open, the Finder can have numerous tabs available. This makes working on the Mac easier and means that you no longer need third-party apps to do Finder tabs. There is also tagging, which allows you to tag files and make them easier to find. One more great thing is that when you have an Apple TV connected to a Mac, it can be used as a separate display.

Passwords just become much easier to use now with iCloud Keychain. The service syncs passwords between devices and not only suggests complicated passwords, but also remembers your credit card information (but thankfully not the security code on the back of your card).

Anki: Toys of the Future

There was a live demo by a brand new company called Anki, who showed off a real world racing game called Anki Drive. It is similar to remote cars of the past, but better. The cars are controlled by iOS devices and can sense the track it is driving on.

The Calendar app for Mac was also updated. The leather is gone, and it looks more like a typical Mac app. Locations can be searched within the app, and the transit time can be added to events you that you know not to book anything during that time.

Maps are coming to Mac too, and it is much needed. You can search for directions on you computer, and send them off to your iOS device. Maps also have the features you would expect, including 3D flyover.

The AirPort Extreme was updated as well. It has a brand new look and now supports 802.11ac. Plus, there is even a “beam forming antenna array” that provides more power to 802.11ac devices.

Finally, A Sneak Peek At The Mac Pro

Apple promised that they would bring a Mac to the USA to be assembled earlier this year, and we now know that it will be the Mac Pro. The professional class computer has a completely new design, taking up one eighth the volume of the previous design. It has tons of ports, and will amazingly support 3 displays at a 4K resolution.

MacBook Air Gets A Bump

The hardware updates don’t stop there. The MacBook Air got a refresh, and receives a huge battery life increase. There is also support for 802.11ac, which will hopefully work great with Apple’s new Airport router.

Though there wasn’t an update for iWork on the Mac, Apple did bring back iWork for iCloud on the web. This includes Pages, Numbers, and Keynote. iWork for iCloud will also sync with the iOS versions of iWork and be available to the general public later this year.

All of Apple’s native iOS’ apps have received a major update in iOS 7. Jony Ive played a big part in reshaping the look and feel of iOS. The skeuomorphism is gone, and the UI has a flatter appearance that looks similar to the music app Rdio. Translucency and the color white also play a huge role in this redesign. Also, the 3D background perspective is fantastic.

The much rumored radio service by Apple was officially announced. It will not be called iRadio, but instead its name is iTunes Radio. The service is like Pandora and integrates with the Music app on iOS and iTunes for Mac. The service will be free with ads or ad-free as part of the $24.99 per year iTunes Match subscription. It’s pretty much Songza, but with Apple’s iTunes library. The service will only be available in the US immediately.

Photography was not forgotten about, as changes were made to the Camera and Photos apps. In the Camera app there are new ways to take shots, including traditional and cropped photos. One of the main feature updates to Photos is called “moments.” This is a way to sort pictures into groups, such as when they were taken. The app also now ships with a bunch of photo filters.

Siri has been improved too. New languages have been added, including German and French, with more on the way. The voice of Siri is new, and there is even an option for a male voice. Siri will be included in a new feature called “iOS in the Car,” which will allow drivers to do things such as make phone calls, play music, and iMessages dictation.

Besides a new look, iOS 7 also added some key features that people have been clamoring for. These features include Control Center, improved multitasking, and AirDrop support. Control Center brings up important settings such as Wi-Fi and Bluetooth. Multitasking has been improved by showing different windows of the apps you have open by double-tapping the home button. AirDrop allows for sharing things like photos and contacts between users with a peer-to-peer connection. As it stands, AirDrop doesn’t work with OS X. Could change by the time the beta ships to the public.

This was a great WWDC keynote, and the crowd really seemed to enjoy it. Many Apple fans will be excited to see these product updates when they are released to the general public in the coming months.