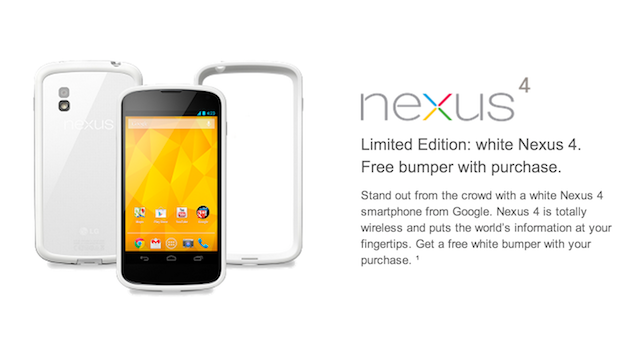 The white variant of the Nexus 4 has just hit the Google Play store. This device is essentially the same device as the classic black Nexus 4, but includes a white rear panel and white sides. The device’s front panel, however, has remained black. Google has labeled the white variant of the Nexus 4 “limited edition” and has also thrown in a free white bumper with the device. The white Nexus 4 is the same price as the standard Nexus 4 and is available in 8GB and 16GB models. T-Mobile subscribers can purchase the white device via their website as well using the UnCarrier pricing plan.

The white Nexus 4 officially launched two days ago in Hong Kong, but has taken a bit of time to make its way over to the States. We should see the white device hit the rest of North America, Europe and Asia during the coming weeks.

The Nexus 4 is Google’s current flagship Android smartphone. The device is only available off-contract and is priced competitively at $299 and $349 for the 8GB and 16GB models respectively. The device supports HSPA+ networking and offers 2GB of RAM with a powerful quad-core Qualcomm Snapdragon S4 Pro CPU.