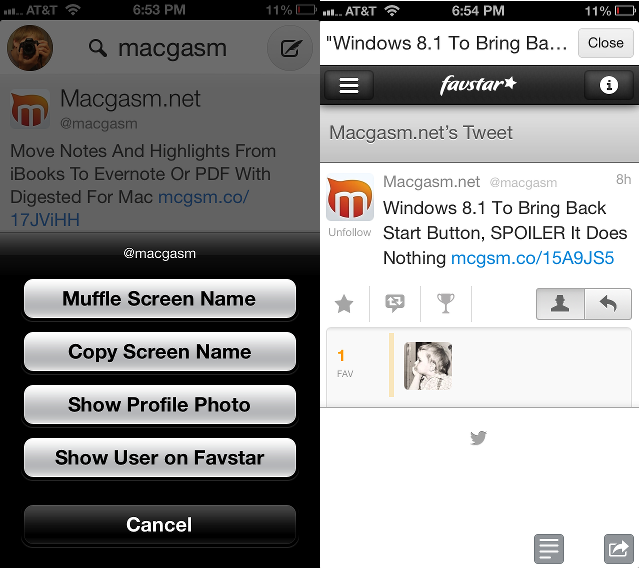 Iconfactory’s Twiterrific has been updated to version 5.2.1. This update brings Favstar support to tweets and user profiles amongst other features. Favstar information on a specific tweet can be viewed via the ‘more actions’ button that is revealed by tapping on a tweet. If you’d like to view a user profile in Favstar, press and hold on the user’s Twitter avatar and tap the “Show User in Favstar” button.

Other additions to Twitterrific 5 include the ability to view Twitter Trending Topics via the search bar. The update has also brought app badges for push notifications. When enabled, you can view a notification count on Twitterrific’s icon on your home screen.

Twitterrific’s latest update brings a plethora of improvements and bug fixes to the app as well. The most notable improvements include support for Twitter stock symbols, faster tweet loading times, and VoiceOver updates amongst other improvements. The annoying pull-to-refresh display bug has also been squashed in the 5.1.2 update. A full list of bug fixes and minor improvements can be viewed on Iconfactory’s website.

When version 5.0 of Twitterrific was released in December of 2012, the application was given a complete revamp with a new design and universal iPad support. Twitterrific’s user interface is very minimal and features a helpful, color coded timeline. If you’d like a copy of Twitterrific 5 for your iOS device, expect to drop a mere $2.99 on the App Store.