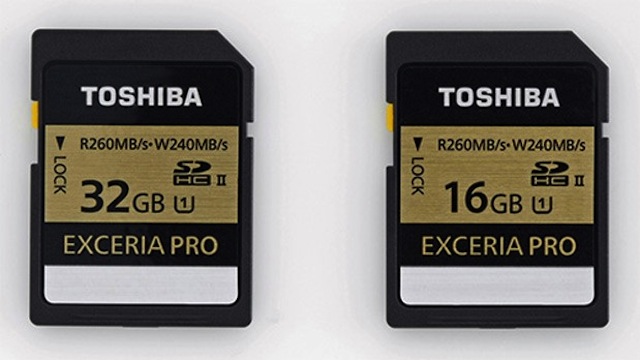 SD cards aren’t hard to come by, but in today’s day and age people are always looking for the best and fastest of anything. Toshiba announced today that it will be launching new SD memory cards that offer the world’s fastest write speeds.

The announcement came courtesy of a press release that introduced a new series of SD memory cards offering the “world’s fastest data write speed.” The new cards will be part of its line-up of EXCERIA memory cards. The new EXCERIA PRO and EXCERIA cards will be launching in major markets around the globe in October, starting with the EXCERIA PRO in Japan.

The EXCERIA memory cards will be available in two series. The EXCERIA PRO series will offer photographers a data write speed of 240MB/sec, which is the world’s fastest, and the EXCERIA series will write at 120MB/sec. This will allow digital camera users to snap still images continuously at high speed.