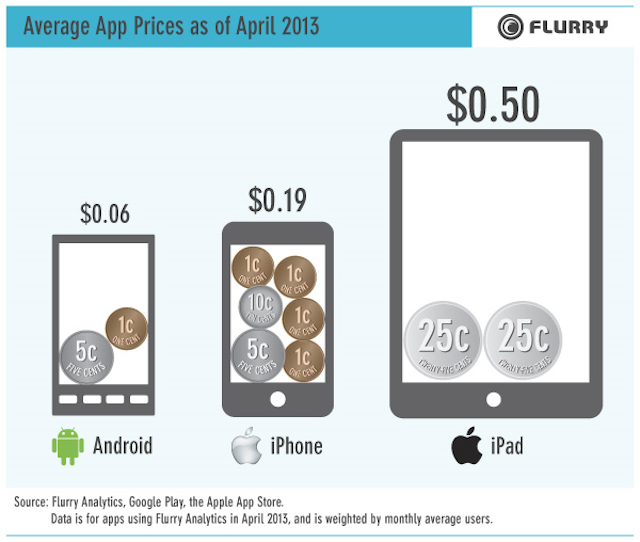 If you’re buying an app you don’t usually spend under a dollar, so you would think the average cost of an iPhone app wouldn’t be less than that either. But did you know that the average iPhone app actually only costs $0.19? That’s according to a report by Flurry, which looks at how app prices have changed over time.

But just because you can download an app for free, doesn’t meant the developers aren’t making any money. Most app developers who offer free-to-download games make money from in-app purchases, ads, or by offering a premium version of the app for users who are willing to pay a little bit of money to access more features.

Not everyone is interested in upgrading though and it seems that nowadays more and more people want free apps and free content and aren’t willing to pay for more.

“People want free content more than they want to avoid ads or to have the absolute highest quality content possible,” Mary Ellen Gordon explained, who is the Director of Industry Insights and Analysis at Flurry.

While the average iPhone app is $0.19, the average iPad app will cost $0.50, which isn’t a huge increase. Android apps cost even less than both iOS devices at $0.06 on average.

According to Flurry, this trend is likely to continue, which means apps will likely become more and more app-filled as time passes because developers need to make a living too if people aren’t interested in premium app versions.