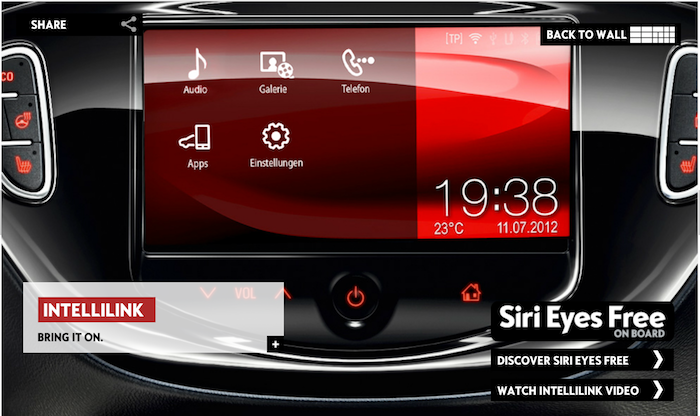 Opel, a General-Motors owned European automaker, has announced that the Adam, the company’s entry level automobile, will feature Siri Eyes Free as a €300 ($400) add-on. This integration with Siri will allow Adam users to send messages and emails as well as perform other tasks using Siri without touching their iPhone. However, unlike other cars with Siri Eyes Free, the Opel Adam will not display iMessage/SMS conversations on the car’s display. If you’d like to view Siri Eyes Free in action, we’ve embedded Opel’s promotional video above.

Using a steering wheel-mounted button, customers with a compatible iPhone1running iOS 6 can direct Siri Eyes Free to perform a number of tasks while they safely keep their eyes on the road and their hands on the wheel. This is more than traditional voice activation – you can speak to Siri Eyes Free in ADAM just as you would a person with a conversational tone.

If you’re an Adam owner who purchased your car before June of 2013, you’ll be able to update your car with Siri Eyes Free integration by using a free IntelliLink update. Intellilink is Opel’s infotainment system that integrates with iOS and Android devices to offer music, navigation and other functionality via the car’s full-color screen.