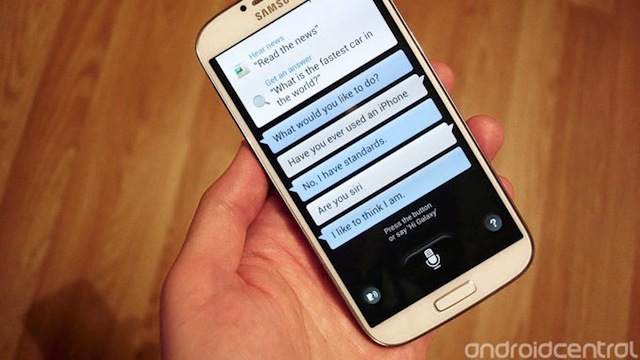 If there’s one thing Samsung loves doing, it’s bashing Apple and Apple fans, so it’s only fitting that its S Voice assistant is programmed to throw a few punches as well. When asked if it’s ever used an iPhone, the S Voice assistant responds with a biting remark: “No, I have standards.”

Even though it takes a shot at Apple, the S Voice assistant can’t help but admit that it also likes to think of itself as Siri. When asked, “Are you Siri” the response is, funnily enough, “I like to think I am.”

According to Android Central, the S Voice gives these responses on the Galaxy S4 and varying results to these questions might be seen on other Samsung smartphones.

S Voice is Samsung’s equivalent to Apple’s Siri, and first launched last year with the Galaxy S III, just a few months after Siri arrived on the iPhone 4S. Both assistants offer similar functions, like being able to ask questions, set reminders, and make phone calls.