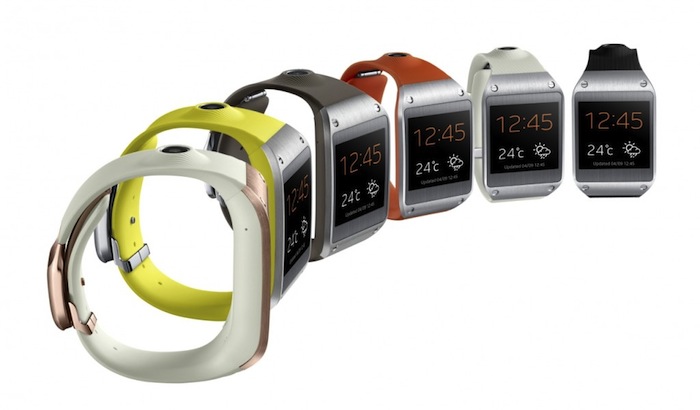 Samsung has announced its new smartwatch,the Galaxy Gear,  at the company’s IFA keynote in Berlin, Germany. The smartwatch is powered by an 800MHz CPU and 512MB of RAM and has 4GB of internal storage. As far as screen real estate goes, the Galaxy Gear has a 1.63-inch AMOLED touchscreen.

The smartwatch’s wristband comes in six different colors and has a built-in 1.9-megapixel camera and a speaker. As far as the device’s battery goes, it’s pretty small at 315 mAh. This should get you through 24 hours of “regular use.” One day.

As far as software goes, the Galaxy Gear can send and receive calls, texts and can receive notifications from some Samsung smartphones via Bluetooth. The device also has S Voice, videos memos, and third-party app support. Samsung has promised that more than 70 third-party apps will be available at launch. Some of these apps include Path and Evernote.

While the software sounds great on paper, it already has its fair share of issues. Vlad Savov of The Verge has noted that he experienced “tangible lag to anything you do with the Gear.” So clearly, the software isn’t quite ironed out yet. Oh, and don’t expect to use the Galaxy Gear with your existing Samsung smartphone either. Currently, the Gear looks to only be comparable with the Galaxy Note 3 and Note 10.1.

If you’d like to purchase a Galaxy Gear, you’ll be paying $299. The device launches on September 25th. Or you can wait until generation three, which should provide ample time for a copy/paste job based on its competitors’ advancements.