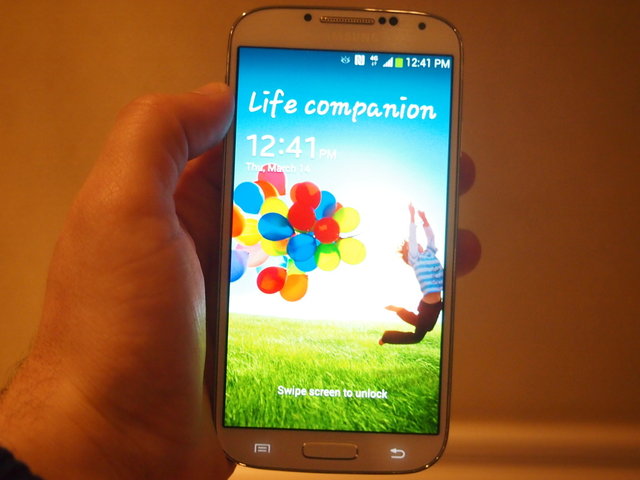 After several months of build-up and rumors, the Galaxy S4 has finally been shown off for the very first time, and what was shown was impressive. While the phone won’t be released until sometime in April, today’s Samsung Unpacked event revealed a wealth of information on Android’s new king of the jungle.

Samsung has focused on significantly upgrading both the hardware and software of their new release, so let’s first take a look at the hardware.

Samsung has managed to up both the size and quality of the S4’s display, and even more impressively, the company has managed to fit it into a smaller package than that of the previous S3. The display has gone from a 4.8-inch HD Super Amoled with a resolution of 1,280×720 and 306 ppi (pixels per inch) to a 5-inch HD Super Amoled with a gorgeous resolution of 1,920×1,080 and 441 ppi. All this and the device still manages to maintain the same width as its predecessor, while getting slightly shorter and 0.7 mm thinner. The bezels on the sides of the S4 have been decreased in size to the point where they almost no longer exist. The phone’s casing itself is still made primarily from plastic materials, with the plastic being covered in tiny textured circles to give it a less plasticky appearance. The case, however, still feels smooth to the touch. The phone’s shape remains pretty similar to to the S3’s, with just some slightly more rounded corners and straighter edges going down the sides.

Speed obviously won’t be a concern on the S4 either, with the phone sporting a 1.9Ghz quad-core Snapdragon processor and 2GB of RAM. However, in regions other than the U.S., the S4 will ship with the much anticipated Samsung Exynos 5 Octa eight-core processor. Both processors should offer more than enough speed for you to know what to do with for now. The S4 will come in 16GB, 32GB and 64GB variants, with a micro SD slot that allows users to expand their memory by an additional 64GB. Customers will also be able to choose from either “white frost” or “black mist” for their color. (We’re talking about painted plastic here.)

The camera on the S4 has also seen a significant bump, with a new 13-megapixel rear-facing camera replacing the old 8-megapixel camera of the S3. It still comes loaded with LED flash, autofocus and 1080p video recording as well as a 2-megapixel front-facing camera. Samsung’s big push with its camera wasn’t with the new hardware though; it was with the new camera software. Samsung has ripped the elegant UI from its Samsung Galaxy Camera and put it straight into the S4. This includes a mode button that brings up a scroll wheel filled with a plethora of different shooting modes and options. For example, select “eraser” mode and you can now simply tap on unwanted people in an image and remove them from your shot. “Drama shot” allows you to take a quick succession of nine pictures of someone performing an action (like a skateboard trick) and the phone will then combine all 9 shots into one cool composite image of the entire action. Another is the “dual-shot” mode, which allows you to use both the front and rear-facing cameras at the same time. You can even apply unique filters while taking a dual-shot picture to create a truly cool shot. Needless to say, all of this makes Apple’s camera offering seem incredibly bare bones. While Apple likes to go for the simple and accessible route, these are certainly some features that would be nice to see in iOS.

Outside of the camera app, Samsung has made a number of other huge software enhancements. One of the most exciting is Air View. Air View lets you hover your finger over part of the S4’s screen to get an extended and more detailed view of that item. For example, if you’re scrolling through a list of photo thumbnails, you can simply hover you’re finger over one of the images and it will be blown up to a larger, more visible size. Scroll through your emails and hover over one to see the first few lines of that email get expanded in front of you.

Also added was the Air Gesture feature, which allows you to swipe over your phone to do things such as switch between photos, songs and web pages. You can also use the feature to answer calls by motioning your hand over the phone.

The S4 also incorporates head-tracking technology which has a number of uses. When the phone sees that you’re looking directly at it, it will prevent itself from dimming the screen. If you’re watching a video and the phone senses that you look away, it will quickly pause the video and resume it once your eyes are back on the S4. The phone includes some new apps such as an analog to digital information converter, that is able to read business cards and turn them into phone contacts and a detailed health app called S Health, which although originally released last July, now provides detailed physical activity information to you about your day (such as how long you’ve spent walking, running, climbing stairs etc..) using the Galaxy S4’s built in pedometer.

From all that has been shown, the Galaxy S4 is looking to be an incredibly promising device. The announcement and reveal would have been almost perfect if it weren’t for that kid and his box… The ball is in Apple’s court now as we wait to see their next big product announcement.

Pricing for the S4 has yet to be announced, but expect it to be $199 with a 2 year contract like the S3 was at launch. It’ll be available on AT&T, Verizon, T-Mobile, Sprint, Cricket and U.S. Cellular when it’s finally released sometime this April.