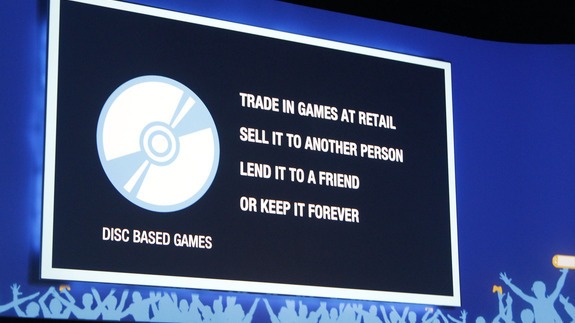 At yesterday’s E3 press conference, Sony dropped the bomb that the PS4 would in fact support used games as opposed to Microsoft’s Xbox One, which has been receiving flack for its decision to place limitations on its users’ ability to trade in/lend games. Now, however, it turns out that Sony might not have been as clear as they could have, and that third party publishers will in fact have the option to put some sort of DRM on their games.

At yesterday’s presentation, Sony Computer Entertainment America president Jack Tretton made it incredibly clear that the PS4 would be fully supporting used games. The company even made a video, mocking Microsoft’s decision to try and stop the practice.

But in a later interview with Gametrailers, Tretton’s message is slightly different. It now sounds like it will only be first party games published by Sony that won’t put any limitations on trading games, and that third party companies like EA and Ubisoft will be able to put in place measures to stop used games if they so desire.

“Well, I mean, we create the platform, we’ve certainly stated that our first-party games are not going to be doing that, but we welcome publishers and their business models to our platform,” he told Gametrailers. “There’s gonna be free-to-play, there’s gonna be every potential business model on there, and again, that’s up to their relationship with the consumer, what do they think is going to put them in the best fit. We’re not going to dictate that, we’re gonna give them a platform to publish on.”

“The DRM decision is going to have to be answered by the third parties, it’s not something we’re going to control, or dictate, or mandate, or implement,” stated Tretton.

While these statements are somewhat confusing, it seems like Tretton is referring to things like online passes, as seen on PS3 games, that developers can implement to deter used games, but not prevent them. Tretton said during the conference that DRM on the PS4 would work the same as on the PS3, so I’d expect used games will still work smoothly on the PS4.

Expect Sony to come out and clarify sometime soon, although considering it made such a big deal about its support of used games at its press conference, I’d say it’s safe to say that they’ll end up working just fine on the new console.