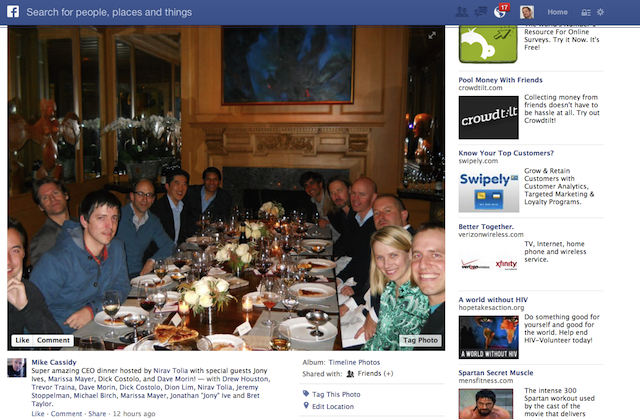 An interesting photo popped up on Facebook recently, posted by Mike Cassidy, the director of Google X. The photo showed a CEO dinner party that included a number of the biggest names in the tech industry, including Apple’s SVP Jony Ive, Yahoo! CEO Marissa Mayer, and CEO of Twitter Dick Costolo.

A big reason why Yahoo’s board hired Marissa Mayer as CEO was because of her social and professional connections in Silicon Valley, which were out in full force last night at the dinner party hosted by Nirav Tolia. Tolia is a long-time entrepreneur, who’s now running the local social network, Nextdoor.

It’s not really clear what the purpose of this gathering was and a spokesperson for Yelp, Stephanie Ichinose, confirmed that CEO Jeremy Stoppelman was there but wouldn’t say more than that: “He was at a dinner with a bunch of execs last night. Nothing more to report.”