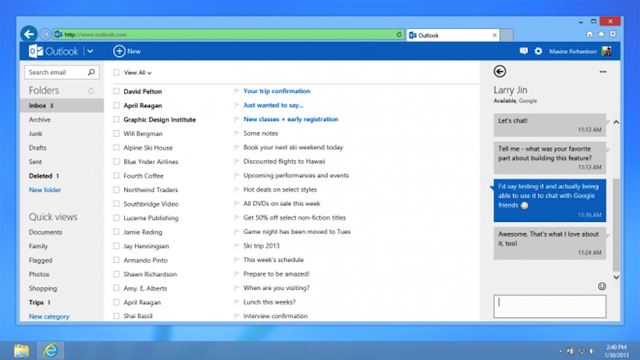 Microsoft is pulling out all the stops to bring more people over to its new Outlook.com webmail service. It started by getting rid of Hotmail and bringing millions of users over to the service and now it has integrated Google Talk contacts into Outlook.com’s messenger service to entice Gmail users to switch.

Starting today, you can now chat with any of your Google Talk contacts from the web portal, right from your Outlook.com inbox, SkyDrive app or calendar. All of your Google contacts will move to your messenger list, which already includes your Facebook friends and Skype contacts.

“The notion here is it’s very much about choice,” Dharmesh Mehta, the Senior Director of Outlook.com, explained. “You may want to chat with your Facebook friends, Google friends, or Skype friends – you can decide. It’s just built in.”

Previously, Microsoft had announced how easy it is to import contacts from Gmail as well. The company didn’t give a specific number as to how many people have actually moved from Gmail to Outlook.com, but it did say that one-third of its initial 60 million preview users came from Gmail. Mehta said at that time that the top request from former Gmail users was the ability to chat with their Google contacts.

Microsoft’s new webmail service already has 400 million users, and with the added integration of Google Talk, Oulook.com might boost that number even higher.