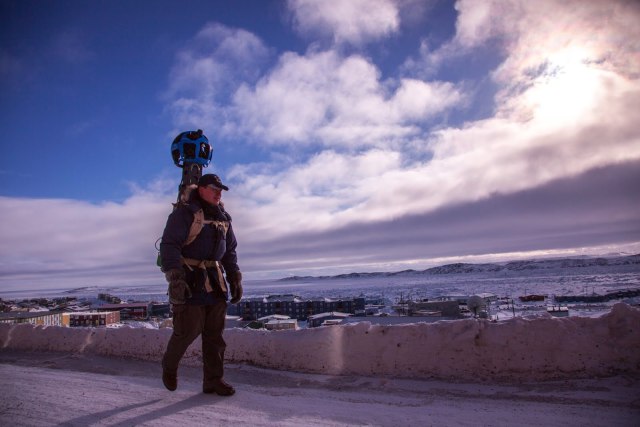 Google wants detailed maps of everything, everywhere. That is why the company first began photographing roads and cities with Street View and why the company has since moved to photographing harder to reach places only accessible by foot like the Grand Canyon, and now the territory of Nunavut in Canada’s arctic.

What’s interesting about this mission is that, unlike the company’s photographing of the Grand Canyon, the man walking around with the big Trekker camera on his back isn’t a Google employee. Chris Kalluk is the man sporting the portable Street View camera this time around, a local resident of Nunavut and member of the non-profit group Nunavut Tunngavik that has volunteered to help Google create more detailed maps of Canada’s north.

Kalluk recently trekked through Iqualuit, Nunavut’s capital, and had this to say: “I’m wearing the backpack to collect Street View imagery as I walk to the shore of Frobisher Bay, where the wind is the strongest and you can see the tide piling up mountains of sea ice. On the way I’ll pass sled dogs tied up outside houses, yapping in anticipation of their next trip. And I may stop to check out an igloo, built by Inuit craftsmen using methods passed down over a millennia.”

The Google team doesn’t just want to capture pictures of Iqualuit’s environment, however. The company is also sitting down with members of the community to help create a detailed and complete depiction of their home. “At the end of the day, when it’s time to warm up, our community will gather around two dozen computers at the local library to conduct a MapUp workshop”, stated Kalluk. “I’ll work with Iqaluit’s elders, local business owners, political leaders and high school students to show them how we can use Google Map Maker to add the streets, shops and points of interest – those places that make Iqaluit home – to Google Maps.”

It certainly sounds like Kalluk is enjoying the opportunity to explore his home province, especially since the beauty he captures in his pictures will soon be available for the whole world to see.

The pictures have yet to be published, but hopefully the wait won’t be much longer.