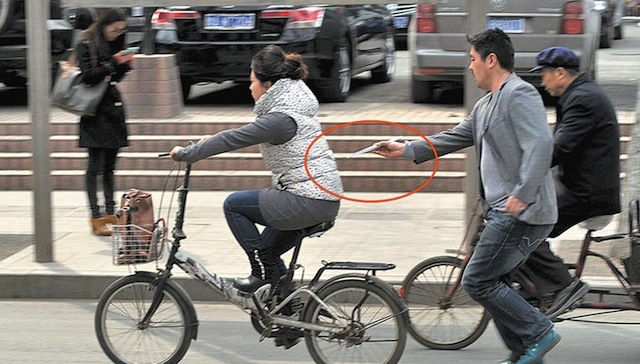 While in North America we like to steal people’s cool technology with violence and threats, the thieves of China have a much more graceful method.

The man pictured here was recently spotted in China pickpocketing someone’s iPhone using only a pair of chopsticks. If stealing with a pair of chopsticks wasn’t enough for you, don’t worry, as this man also did it all while jogging behind an unsuspecting biker.

While the thief was stealthy enough to successfully snatch the iPhone, he wasn’t able to avoid being photographed while doing it. The photographs blew up on Chinese news and eventually led to the man turning himself in a couple days later.

The thief claimed he was stealing to support his young daughter.

While this feat was certainly impressive, what I really want to see next is an iPad theft via chopstick.