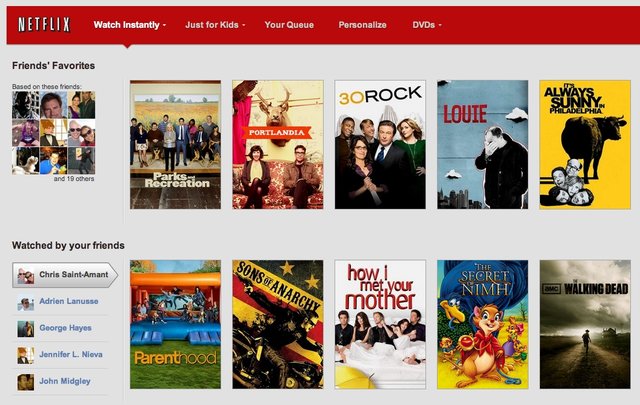 When you connect to Facebook on Netflix, you will now see a list of all your other Facebook friends that have also linked their accounts to Netflix. You can then click on each of your friends’ names and view a list of their most recently watched movies and shows. There is also a second list called friends’ favorites. This is a collection of content on Netflix that your whole ensemble of friends have given high ratings to, such as four or five stars.

The old Facebook integration still remains, so you can still allow Netflix to post what you watch to Facebook; however, you can now also turn that feature off. You’re also able to hit “do not share” at the start of streaming any piece of content if you don’t want it to show up for your friends. Unfortunately, you can still only link one Facebook account per Netflix account, so families that share the same Netflix account will have to choose which member of the family’s friends will become integrated in with their account.

This is a modest start for Netflix’s social experience; however, I feel as though it should still be much better. So much of watching and discovering movies and TV shows is social that I think Netflix deserves to have a much deeper offering than it does now. I should be able to ask things like “show me all my friends who like horror movies” and then “show me all the horror movies this person has watched on Netflix”. Then I should be able to suggest a horror movie for them to watch and have my friend be able to message me back after they watch it telling me what they thought.

If Netflix wants to get as serious about social as I want it to, I think it should begin to construct its own friends list so that they no longer have to be dependent on Facebook.