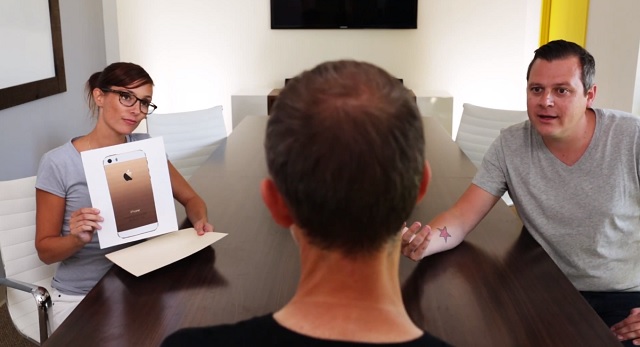 While many were impressed with what Apple showed off at its recent iPhone 5S and 5C unveiling, this wasn’t the case for everyone. Microsoft, in fact, thinks that Apple’s new products are so laughable, that it needed to create a video in order to poke fun at them.

Microsoft dubs the video “A fly on the wall in Cupertino?”, setting it up to be secret footage taken from Apple’s meeting room. The video then goes on to make fun of the 5C’s plastic casing, the 5S’s gold color option, and even things like the rumored iWatch.

The video, which ends with the hashtag #timetoswitch, personally seems like somewhat of a weird move by Microsoft. I feel like the company could do a much better job by showing off the unique aspects of its Windows Phone OS as opposed to nitpicking weird gripes with its biggest competition.

UPDATE: Do to the Internet’s loud and overwhelming negative response, Microsoft has already gone back and pulled the video off YouTube. We’ve posted a re-uploaded version of the original Microsoft posting below.