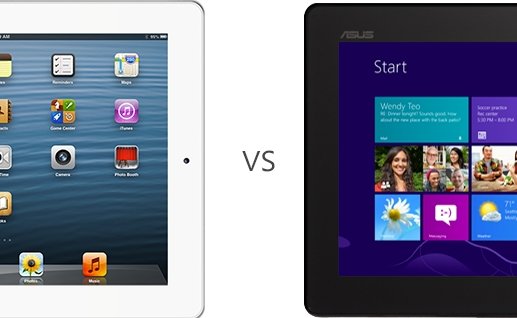 If you’ve been keeping up with Microsoft’s advertising efforts, the past few weeks you’ve seen the company release a few videos that pit a Windows 8 tablet and Apple’s iPad head to head. Microsoft has now continued this campaign and has launched a full website, where people can compare a 4th Gen iPad to four different Windows tablet models.

The page, which is designed to convince you that Windows tablets are better than the iPad, opens with the description, “Get the best of work and play with a Windows tablet. Play games, watch your favorite movies, read, and catch up with family and friends. Plus you can get stuff done with Office, do two things at once side-by-side, and access your files anywhere. An iPad just can’t do all of that.”

While the only two things from that list that an iPad actually can’t do is Office and use two apps at once, we’ll let Microsoft slide this time.

Visitors to the site can compare the iPad to the ASUS VivoTab Smart, the Dell XPS 10, the HP ENVY x2, and the Microsoft Surface RT. There is a long list of different categories they use to compare, such as weight, cost, and then a list of things that only the Windows tablets can do, such as having multiple accounts and Microsoft Office.

While obviously there is a lot of bias in the comparison, Microsoft seems to do a fairly good job at promoting what sets its devices apart from the iPad.

Visit the site and come to your own conclusion here.