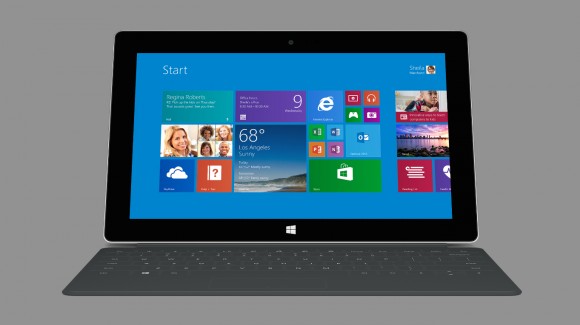 If I were a gambling man, I’d probably bet that if you’re reading this, you don’t own a Microsoft Surface. Not just because this is primarily an Apple site, but because pretty much no one bought a Surface. Microsoft is hoping it can have a better go at it this time, so today it finally announced the Surface 2 as well as the Surface Pro 2.

As for the standard Surface 2, the device’s resolution has seen improvement with its new 1080p ClearType display. The device will also reportedly run much faster than the original Surface RT, with its new Tegra 4 processor along with faster WiFi speeds and memory. Battery life should also see an improvement of roughly 25%, and you can now expect there to be a USB 3.0 port on the device.

As for its appearance, the Surface 2 has slimmed down a bit over its predecessor, dropping from 9.4 mm thick to 8.9 mm. Its construction has also changed, with it being constructed of just two pieces of magnesium now instead of three.

As for the high end Surface Pro 2, that device is seeing some substantial internal upgrades as well. Battery life on the device is said to be 75% better, while processing speeds are estimated to be 20% better. It also includes an improved kickstand and higher color accuracy.

The devices aren’t launching until October 22nd, but you can start pre-ordering them as early as tomorrow morning. You can pick up the 32GB Surface 2 model for $449 or $549 for the 64GB version. The Pro version will run you substantially more, with the base model price beginning at $899 for 64GB of storage and 4GB of RAM.