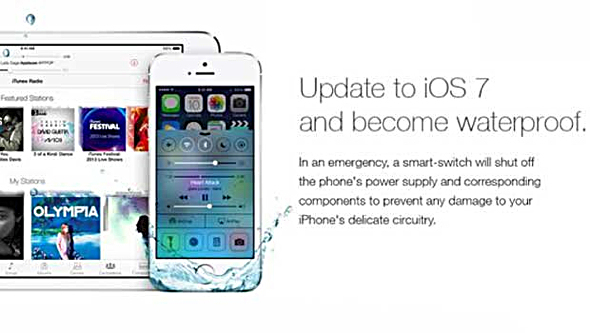 That’s the idea behind the prank that some 4chan users reportedly started this past week, where they created a fake iOS 7 ad which advertises the OS’s waterproof capabilities. You might be asking, “Who would believe a software update could make their phone waterproof?” Well it seems that at least a couple folks on Twitter fell for the joke.

“Whoever said iOS was waterproof… **** you,” wrote one angry Twitter user.

The ad, which was shared through a number of social network sites, reads “In an emergency, a smart-switch will shut off the phone’s power supply and corresponding components to prevent any damage to your iPhone’s delicate circuitry.”

Personally, I think it’s a pretty good prank that does a good job at showing just how clueless some normal Apple customers are when it comes to what their products can and can’t do.

Then again, a waterproof iPhone down the line would be kind of cool.