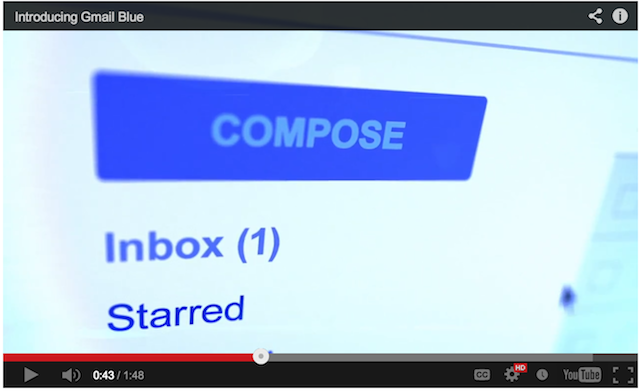 Following the leak of Windows Blue, Google has taken it upon itself to release Gmail Blue. This originally named product will be a free update for all current Gmail and Google Apps users. Gmail Blue has been in the works for roughly six years and Google claims that it is a breakthrough in webmail.

Blue’s flagship feature is all in the name: everything is blue. From the font color to the compose button, it’s all in a cool shade of blue. Google reportedly worked with other colors as well, but found that Blue flowed the best. You can view the full Gmail Blue introduction video directly above this post.

Ok, in all seriousness, if you check the date, you’ll probably notice that it’s April 1st. This is just one of Google’s many April Fools’ Day jokes that hit the web on the eve of April Fools’ Day including the YouTube shutdown and the introduction of Google Nose beta. Out of all of these pranks, I would have to say that I found Gmail Blue most entertaining due to its introduction video.

Speaking of April Fools’ Day, we really hope that the Google Reader shutdown is one of those jokes as well…