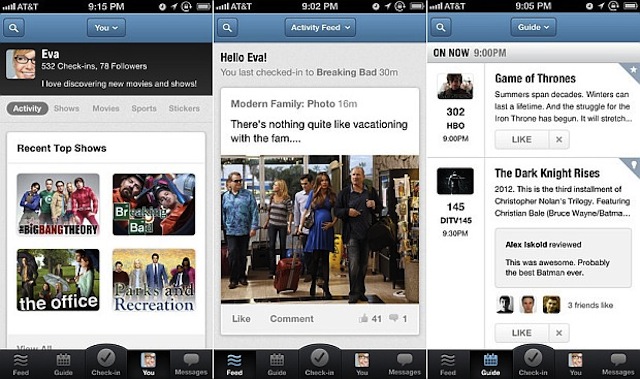 GetGlue, the all-in-one social app for TV, movies, and sports, has been updated today, adding a programming guide, show feeds, and the ability to chat with Facebook friends about a show. The app is also working on a deal with Hulu, which kinda goes to show how much the TV space is evolving.  GetGlue gets especially social with this update. The iPhone app uses Facebook likes to determine which of your friends are watching the shows you like and then gives you the ability to tag them in a Facebook post about the show. This really brings the social side of GetGlue beyond just app users. The same updated app is expected to launch on Android in the next four to six weeks.

The most interesting bit about GetGlue, though, is that it is currently working on a multi-faceted partnership with Hulu. There will be a promotional element that will give GetGlue users the ability to earn a month-long free trial of Hulu Plus. On top of that, GetGlue is committed to indexing all of Hulu’s original content, including shows like Battleground and the Awesomes. GetGlue founder and CEO Alex Iskold said, “We are not about linear TV. We are about what to watch.”

There used to be a clear divide between short-form content available on YouTube and the professionally-produced shows on TV that sometimes would show up online to watch later. With companies like Netflix and Hulu spending millions of dollars on producing original content, this divide is starting to close quickly. The biggest example of this so far is the launch of House of Cards on Netflix, but Hulu and YouTube are now both working on producing their own professional content as well. Connecting users across different mediums and social sites is only going to increase interactivity between the user and a brand or show. GelGlue gets that, and this new update clearly illustrates just how different the “television” viewing experience has changed in the last five years.