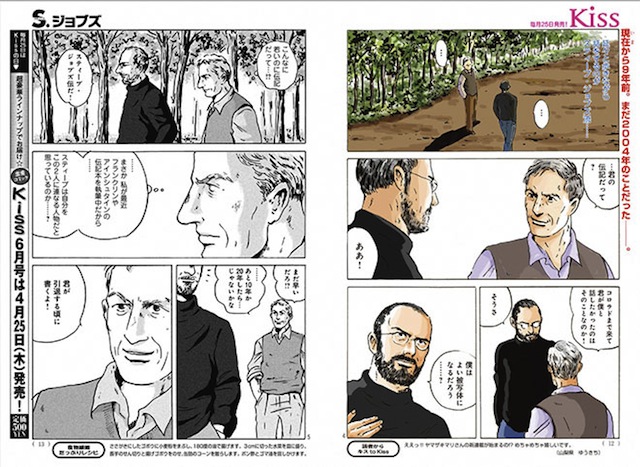 Mari Yamazaki, Manga Taisho and Tezuka Osamu, Cultural Prize winning manga authors, will be launching their version of the official Steve Jobs biography this week. The first chapter of the manga has a preview online to get readers excited for the launch.

Japanese manga publishing house Kodansha released the first images of “Steve Jobs,” which were then posted to Yahoo Japan’s online bookstore. The first chapter of the comic book style biography first appeared in the April issue of the company’s Kiss magazine, which is a monthly Josei manga serial. The magazine targets the young adult to adult female demographic.

The Steve Jobs manga is considered the official adaptation of Walter Isaacson’s authorized biography. It’s told from Isaacson’s point of view and starts in 2004 when Jobs asks Isaacson to pen his life story. Isaacson waits to start working on the biography until Jobs’ wife, Laurene Powell-Jobs calls to inform him that the Apple co-founder is in the late stages of pancreatic cancer.

Other panels in the 14-page preview show Isaacson describing his first impressions of Jobs and an early interview session.

The official “Steve Jobs” manga will continue in next month’s issue of Kiss magazine.