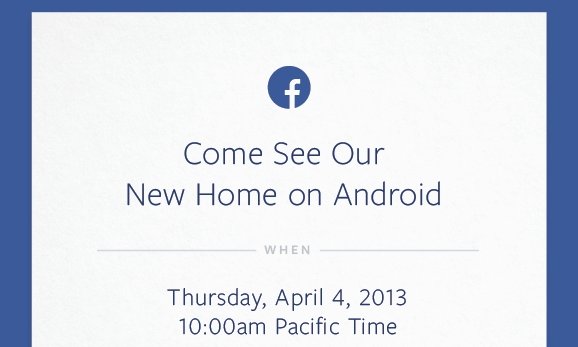 Facebook has begun sending out invites to an Android focused event that is set to take place next Thursday, April 4 at the company’s Menlo Park campus.

The only information that Facebook has given regarding details of the event is the one line of text: “Come See Our New Home on Android.” At the moment, what exactly that means is pure speculation. It could be software in the form of new apps, or it could be hardware in the form of an official Facebook phone, made by Facebook along with a manufacturing partner. There have long been rumors of Facebook working in conjunction with HTC on a Facebook phone; however, these rumors have often quickly come and gone.

Tune in at 10:00am Pacific time next Thursday to see the big reveal and find out what it really is.