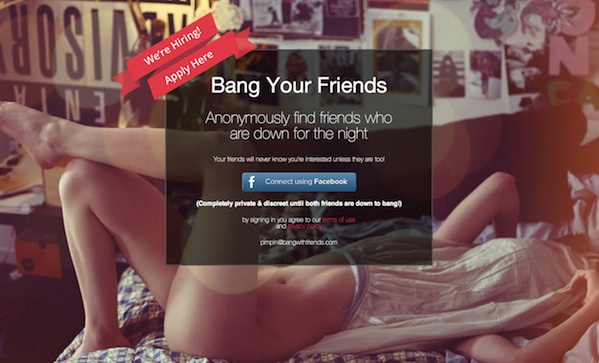 Perhaps you’ve heard of Bang With Friends? The Facebook app that lets you anonymously mark down which of your Facebook friends you want to “bang”, and that then notifies the two of you that you share a mutual desire. Well Zynga’s not too happy about the app’s use of its “with friends” tagline, which Zynga uses in the title for games such as “Words With Friends” and “Running With Friends”.

“We heard through media reports that Zynga has filed a trademark infringement claim with respect to the ‘with friends’ part of our name,” Bang With Friends told the BBC. “As a technology company, we take intellectual property seriously, and will evaluate the case in detail once we receive a copy.”

It’s hard to say whether Zynga will win the case or not, and whether or not the judge will see that the company should have a monopoly on the term “with friends.” Either way, Zynga likely has bigger things to worry about right now.