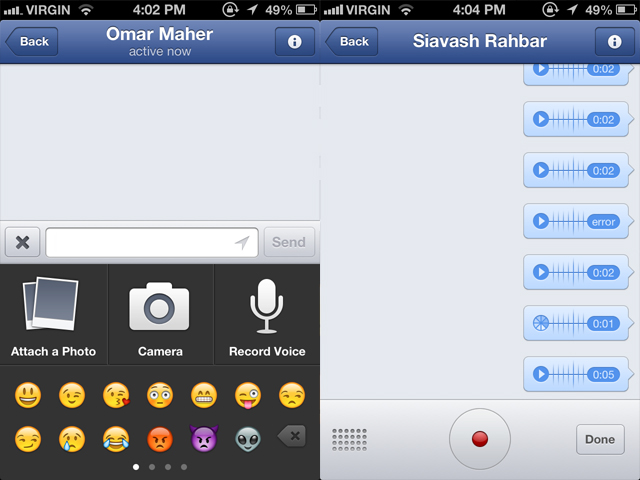 Facebook’s iOS and Android Messenger apps are getting a lot more audible today, as a new update has been released that brings voice messages to the service. Using the Facebook Messenger app, users can now record and send voice messages as an alternative to typing out a written message.

A “record voice” option has been added into conversations, and after selecting it, a red button appears that will record your voice for as long as the button is held down for up to 60 seconds. The app lets you send as many voice messages back and forth as you like so whole conversations can now take place using voice. While desktop users are unable to send their own voice messages, they are still able to playback and listen to the messages sent to them on their computer.

Canadian users are also getting exclusive beta access to a new feature in the form of free voice calling. This allows you to have full length calls with your other Facebook contacts, and like the voice messages, can be used over a phone’s data plan if the user isn’t connected to Wi-Fi.

After having played around with the new update for a little bit, I have to say I really like it. It is super quick to record a message and once you’ve finished recording, it’s sent almost instantly. After sending the message, you’re then able to listen to what you’ve just sent as well as being able to play back messages sent earlier in the conversation. If you happen to say something highly regrettable, it allows you to cancel out of a message while in the middle of recording by swiping your finger away. Unfortunately though, there is no way to listen to a message before you actually send it. This means there’s no way to record a message and to then debate with yourself on whether you should actually send it or not. As soon as you finish recording, the other person receives the message.

I wasn’t able to test out the voice call feature; however, that’s a far more common and less interesting feature to me than the ability to send quick 5 second voice clips.

Also a note of warning: I think it would be safest to stay far away from this feature while intoxicated. Or perhaps that’s the best time to use it. I’m still not quite sure.