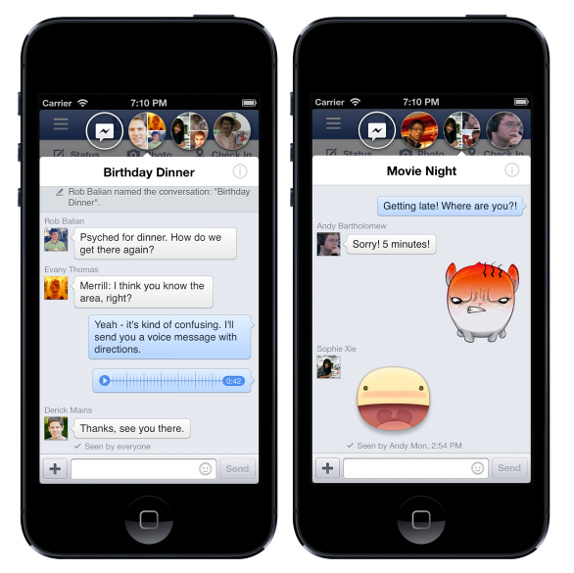 Facebook’s iOS app received a new update yesterday, bringing with it the recently unveiled news feed as well as the Chat Heads feature that was introduced in Android’s new Facebook Home. The update also brings stickers to the app, which provides “a more visual way to express yourself in messages.”

The biggest feature of the update is Chat Heads, which allows you to maintain a conversation with your friends on chat while browsing through the rest of the Facebook app. It isn’t as good as the integrated Android version, which lets you maintain conversations across all of the Android OS, but it is still a welcome improvement.

The updated news feed has a newspaper inspired design that Facebook announced just over a month ago, which brings with it a bigger, more photo-oriented feed as well as an easier way to sort and filter updates from your friends and liked pages. It is the same news feed design that has been slowly rolling out to desktop versions of Facebook.

Stickers are new emoticons that you can send to your friends within chat. They simply act as much bigger, more stylized emoticons that you can now use while sending messages. Facebook’s plan also seems to include monetizing Stickers, as there is a Stickers store users can access that lets you download more of them. Currently all the Stickers in the store say “free” beside them, so it can be assumed that Facebook will begin selling the big emoticons sometime down the line. Which, of course, is just what you wanted to spend that hard earned money of yours on.