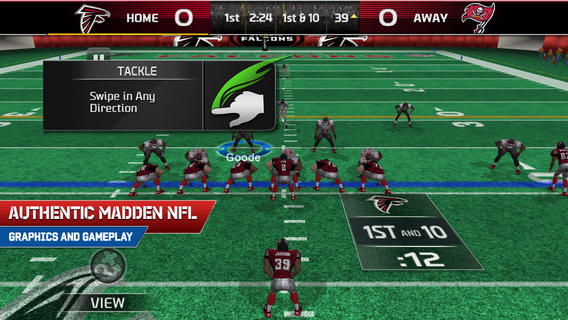 If you can’t afford buying Madden 25 on your console of choice, perhaps you could settle for the free-to-play iOS version. EA today released an in-app purchase driven version of its popular football game, making it the first EA Sports game to be launched as a free-to-play title.

The oddly named “Madden 25”, which is in celebration of the 25th anniversary of the Madden franchise, brings a number of interesting features to the small screen.

An experience 25 years in the making! EA SPORTS delivers the most authentic NFL football experience to date on iPhone® and iPad® with MADDEN NFL 25. Build your Ultimate Team of NFL stars and run the show on offense and defense with new and improved touch controls, game modes and much more!

BUILD YOUR ULTIMATE TEAM
Collect your favorite NFL players from packs or win them in the Auction House, then dominate the field against friends by building your ultimate powerhouse team.

AUTHENTIC NFL ACTION
Madden NFL lets you choose from 32 REAL NFL teams and a roster of more than 1,500 REAL NFL players! Battle it out in true-to-life NFL stadiums, too. Ultra-sharp graphics make gameplay even more realistic. Feel the impact of every game-changing tackle with hard-hitting collision effects!

If Madden 25 sounds interesting, you can try it out totally free from the App Store. If you don’t like it, perhaps just wait another 11 or so years until we start hearing about another “Madden 25.”