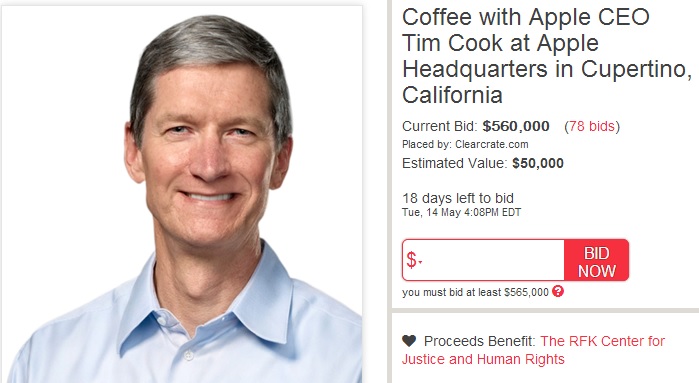 Two days ago, we told you that if you were feeling like a nice cup of coffee with Tim Cook, the date would run you an estimated $50,000. We’re sorry to say that the price is going to end up being a little higher than that, as bidding on the charity auction has reached $560,000 and continues to climb.

The bid has put it over the site’s previous record high, which was last year’s $255,000 winning bid to spend a full day with Bill Clinton. At this point, a total of 78 people have placed a bid with still 18 days remaining. The Apple accessory company clearcrate.com currently holds the spot as highest bidder.

It’s hard to tell whether the companies placing these high bids are doing it because they want to talk business with Tim Cook, or whether it’s simply because when they’re the highest bidder their company name gets shown on the auction’s front page. Some companies may then simply place a high bid with no intention of actually winning the auction in order to get more exposure, with the hope that someone else will outbid them later.

It’s a risky move, however, as bids placed on the site count as legally binding contracts that will get you into significant trouble if you don’t follow through.

If the coffee date still interests you, get ready to potentially spend upwards of a million dollars to sit down with the Apple CEO.