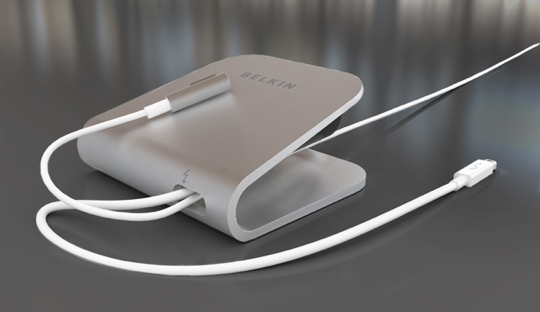 Hey, that Thunderbolt port on your Mac is finally going to get some use. Belkin has officially announced a Thunderbolt-based hub they are calling the “Thunderbolt Express Dock.” Plug in one little Thunderbolt cable to your Mac, and this hub will add three USB 2.0 ports, a Firewire 800 port, a Gigabit Ethernet port, a 3.5 mm audio jack, and two Thunderbolt ports. Nice! I’m thrilled to see that we’re going to actually be getting some use out of our fancy-schmancy Thunderbolt port.

Clearly taking its cue from the school of Ive, this Belkin device is obviously designed to blend-in next to your Mac and Apple monitor. One might even call it inspired by Apple.

Unfortunately, we don’t have an announced price yet. If it’s $20 or $30 USD, this device is a no brainer for anyone looking for more ports. However, I have a strong feeling that they’re going to take advantage of Thunderbolt’s newness and price it ridiculously high. Let’s hope not, though. You can keep an eye out for the Thunderbolt Express Dock sometime this summer, and expect to hear more about it here as details are released.