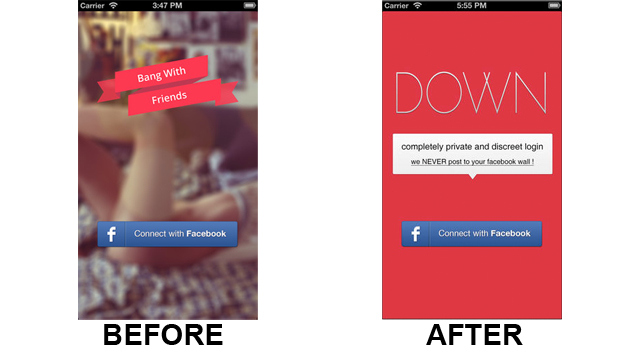 You may or may not already be familiar with the story of “Bang With Friends”. The app, which helps you find viable Facebook friends to hookup with, was pulled by Apple from the App Store just 10 days after its May release.

Well Bang With Friends has returned to the App Store, this time under the new name “Down”. The developers have removed all traces of the word “bang” and instead have made a more innuendo based app.

Now, however, the app has changed the wording to simply say “Down.” You can browse through your Facebook friends and select which of them you’re “Down” for, and if they do the same, you’ll both be notified. Hilariously, the app has also added a new “Down to hang” option. If you see a friend of either gender that you’re simply “Down to hang” with, you can now select that option and be notified if that friend also expresses his desire to hang. Oh, Internet.

The anonymous, simple, fun way to find friends who are interested in you.

Join your friends and over 1 Million people already on our network!

Your friends will never know you’re interested unless they are too!

(Completely private & discreet. We’ll connect you to each other once both of you express interest!)

2. Select Your Attractive Friends: We will only show your friends that you’re interested if they are too!

If you want to try out the app for yourself, download it for free here. Currently, the app remains on Android under its old “Bang With Friends” name. It’s unclear whether the developer plans to update it to “Down” as well, or keep the original name.