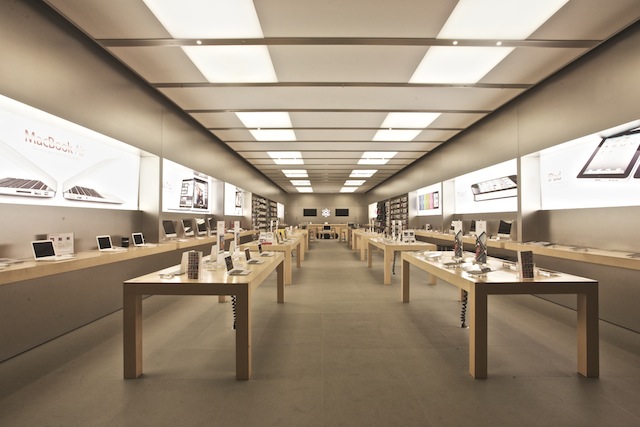 Apple is known to fiercely protect its products from being copied, and now the company has extended this practice to the core design of its Apple retail stores.  The U.S. Patent and Trademark Office has granted Apple’s recent request for trademarks on the minimalist design and layout of its retail outlets.

The description of the trademarks include “a clear glass storefront surrounded by a panelled facade” and, inside the store, an “oblong table with stools…set below video screens flush mounted on the back wall.” How you can trademark this kind of thing is beyond us, but we’re pretty sure lawsuits against Microsoft stores are probably on the horizon at some point.

Last year a fake Apple Store in Kunming, China appeared that featured the white Apple logo and wooden tables. It got a lot of attention after a blogger wrote about visiting it and it apparently looked so real that the salespeople even thought they were working for Apple. Chinese authorities quickly shut it down along with more than 20 other similar fake Apple stores that were selling Apple products but were not actually authorized to do so.

The design of Apple’s retail stores is important to the company. In 2003, Apple was granted a design patent on the floating glass staircase that is seen in many Apple stores, and Steve Jobs is listed as the inventor on the patent.

Apple originally filed its trademark request on the interiors of its retail stores in May 2010 and it was finally approved on January 22.

While trademark rights do not extend outside the United States, often when companies file for domestic protections they will look for similar protection in other countries. “The million dollar question in this instance, as in pretty much all trade dress cases, is just how close a competitor can come to the design without infringing,” Christopher Sprigman, a University of Virginia law professor, told Reuters.

Right now Apple has around 250 retail stores in the U.S., with stores in about a dozen other countries.