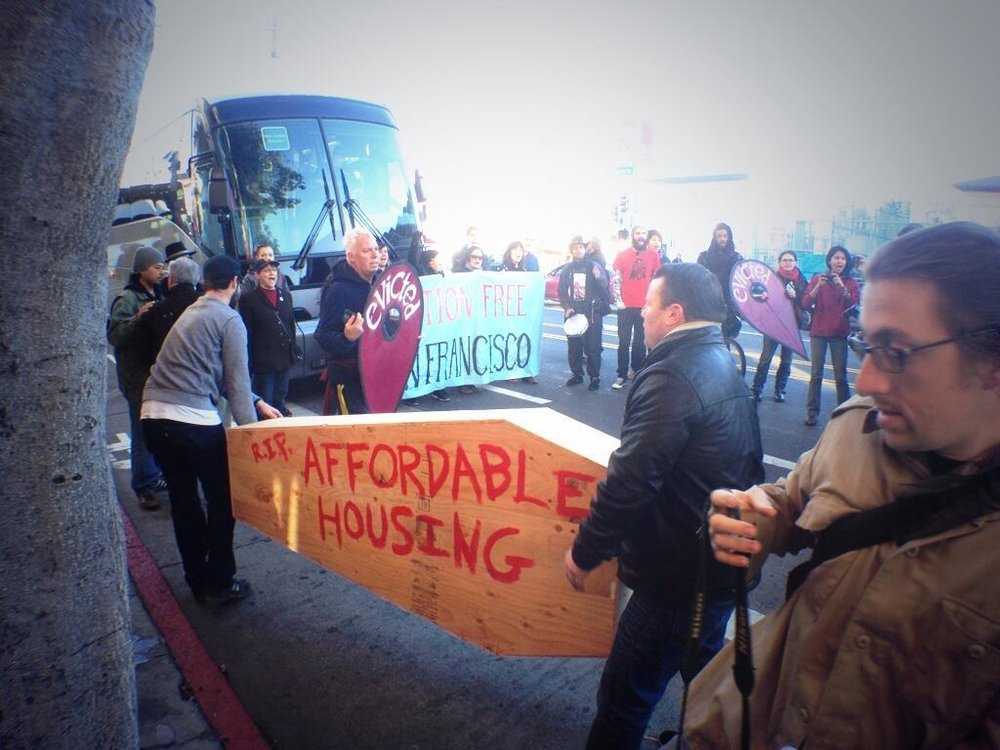 A number of Apple employees experienced a bit of a delay on their way to work today.

Apple offers free shuttle buses to its employees living in San Francisco as an easy way to get from their houses to the company office in Cupertino. Today, one of these buses was halted by protesters as they circled the bus at one of its stops and prevented it from departing.

The protesters are upset with a few different things, including the rising eviction rate in San Francisco, the growing cost of living, as well as the fact that these companies are using public transit stops to pick up their employees.

How do these first two points relate to Apple, you ask? Well the protesters are of the opinion that all the wealthy tech employees living in San Francisco but working outside of it are making property expenses too high since they’re more wealthy than the rest of the population. The protesters also argue that the tech companies which use these bus stops are doing so illegally and without contributing to the city’s public infrastructure. They argue that tech companies owe $1 billion in fines for all the illegal use of these bus stops over the past two years.

Earlier this month, the same group of protesters also stopped a Google bus. There they handed out flyers with their arguments:

Today we are the SAN FRANCISCO DISPLACEMENT AND NEIGHBORHOOD IMPACT AGENCY, and we’re stopping the injustice in the city’s two-tier system where the public pays while private corporations gain.

Rents and evictions are on the rise. Tech-fueled real estate speculation is the culprit. We say: Enough in Enough! The keys to shape the city to their fancy without the public having any say in it. We say, lets take them back!

Tech Industry private shuttles use over 200 SF MUNI stops approximately 7,100 times in total each day (M-F) without permission or contributing funds to support this public infrastructure. No vehicles other than MUNI are allowed to use these stops. If the tech industry was forced to pay for every illegal use of these stops for the past 2 years, they would owe an estimated $1 billion.

One Google employee that was stuck in the bus tweeted this comment:

my #googlebus is still under siege. I agree that there are a lot of probs w/ housing & displacement in SF, but we are not the source of it.

The protestors argue that tech companies should come together to raise $1 billion to put towards more affordable housing in the city.