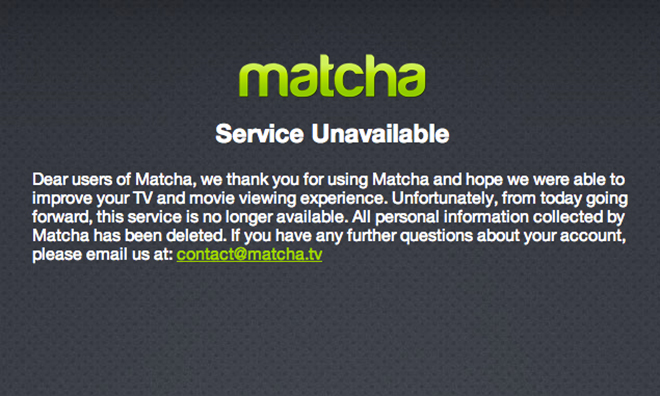 While the Matcha.tv app has been missing from the App Store since May, it now seems like it won’t be coming back. Apple has reportedly purchased the startup for an unknown amount of money and the company has announced that going forward, the service will no longer be available.

Matcha.tv is an app that combines everything from TV providers like Comcast, to streaming sites like Netflix, to video stores like iTunes, and then turns it all into a recommendation app. Users have a universal queue that consists of the movies they want to watch, video’s are recommended based on content users have watched on any service, and you can also see what friends are watching and enjoying.

Matcha.tv has been shutdown to the public since May, when the company revealed that it was pulling the service to upgrade it. Unlike the Terminator though, Matcha.tv won’t be back.

Venturebeat reports that Apple payed between $1 and $1.5 million for the company, however, others have claimed that the real figure is likely much higher.

Expect to see the fruits of Macha.tv’s labor in a future Apple product.