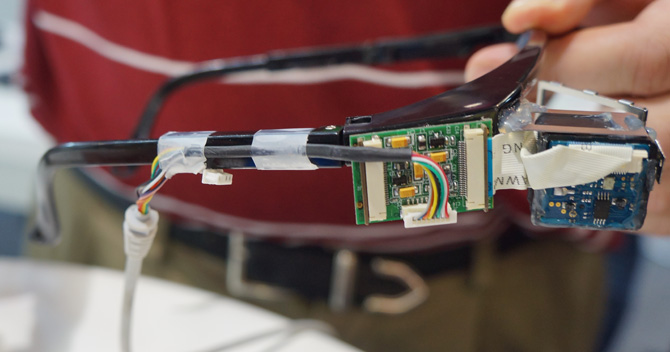 While Google Glass is growing to be a fairly popular topic in the media, people are forgetting that there are companies besides Google that have the capabilities to make a computing eyewear device. One, for instance, is Oculon Optoelectronics, which showed off its prototype “Oculon Smart Glasses” at the annual Computex trade show in Taiwan.

Specs wise, the device can certainly compete with Google’s eyewear. They have a 720p display, a dual-core Cortex-A9 processor, a 5-megapixel camera, bluetooth, wi-fi, optional cellular coverage etc… All this for $500, a fraction of the $1,500 price tag early adopters of Glass had to pay.

The device is just a prototype right now, however, so currently it looks like something that’d struggle to be worth $5, let alone $500. Laptop Mag, got its own hands-on with the product, however, and they said that it seemed promising.

“Depending on the software build its partners chose, the Oculon Smart Glasses will provide speech recognition, gesture control or the ability to connect to a Bluetooth control pad for navigation. Such a controller would require users to carry a separate object with them but would likely offer superior accuracy. If the Android version isn’t heavily modified, you might even be able to attach a Bluetooth keyboard.”

If high-tech glasses on your face is something you’re interested in, but a big hole in your wallet isn’t, perhaps the Oculon Smart Glasses may interest you when they launch sometime in the next few months.