One thing that I always liked doing in Ubuntu was making some of my windows transparent, so I could see what was going on behind them. For instance, if I wanted to watch a movie, but still be able to see what’s going on behind the screen I’d turn down the opacity a little. Being able to do that in OS X is something that didn’t exist until now. Keeping a particular window in the foreground

Afloat lets you, as the title suggests, keep certain windows floating above all other windows at all times. For instance, if you’re working in Google Docs, and you’re getting annoyed every time you jump into another program because the Google Docs windows gets moved to the background, then Afloat is what you need.

After installation, you’re required to close out the applications you’re using, and upon their relaunch, you’ll notice a couple new menu options in the Windows menu of your application.

Like I mentioned off the top, Afloat also lets you set the transparency of your window. You can use a keyboard shortcut to increase or decrease the opacity for every window you want to mess around with. 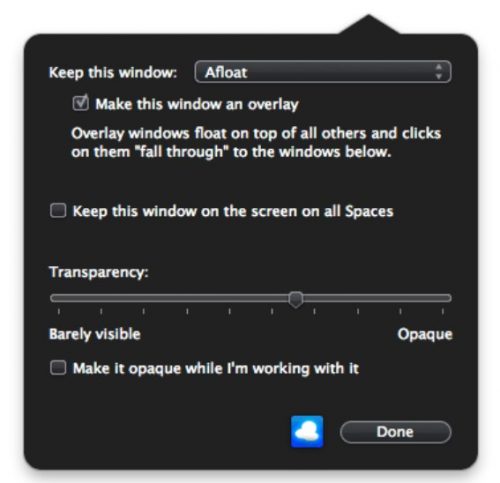 The opacity/opaque settings might not be for everyone, but I know a bunch of people who are already using afloat to de-emphasize iTunes, and some other applications around the desktop.

The application is free, so you’re free to try it out at your leisure.