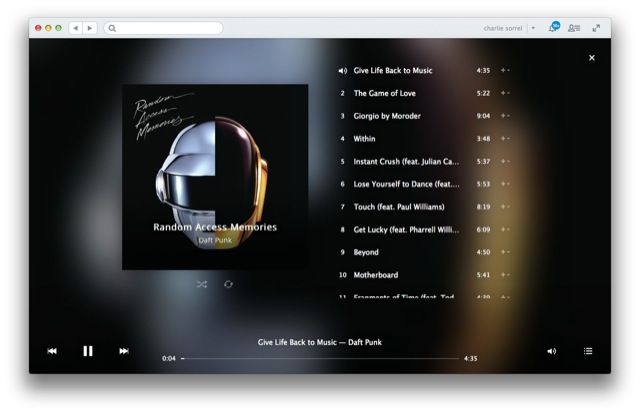 Rdio, the subscription-based music streaming service, has rolled out a new update for its Mac app version. If you also use Rdio on your iPhone or iPad, then you already know the kinds of changes you’ll see when you get the updated version of Rdio on your computer, which features big album art and an “upcoming view.”

If you haven’t used it before, Rdio is similar to Spotify but lets you save music tracks in your own collection to stream.

The new Rdio app for your Mac looks a lot different than the previous version. There’s a lot more for you to see within the app, starting with bigger album art in the icon view. There’s also a now-playing view. If you click the list icon at the bottom on the right side the whole app will become a big album cover with a list of the tracks on the current album or playlist that is playing. At the bottom of the list you’ll also see what’s coming up next.

While this isn’t a huge update to the Mac app, these few changes make Rdio an even better music player. You can get the update with an in-app update or go the Rdio website to get it.