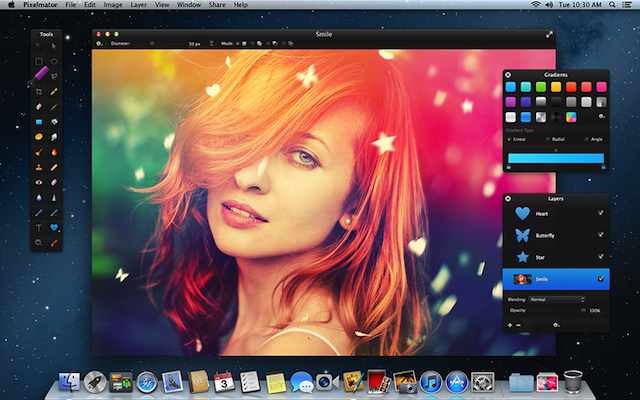 For the last little while, the Pixelmator team has been teasing a new update on their blog for the popular photo editing application for the Mac. Now the update, known as 2.2 Blueberry, has arrived for Pixelmator, bringing over a hundred new features and improvements.

With over a hundred new features, Blueberry makes image editing easier and better than ever before. The new Smart Shape tools brings easy-to-use controls for adjusting outlines and a Smart Move tool that smartly knows when you’re working with an image or shape and gives you whichever options you’ll need for each. There’s also a new Light Leak effect feature that helps you create “stunning, retro-artistically illuminated images.”

This is just the tip of the iceberg. According to the Pixelmator blog, the update also brings new Color Popovers for faster access to color swatches, new gradient presets, improved drawing tools, an improved Type Tool, the ability to copy and past shape styles, and major performance improvements.

“We’re excited to deliver even more, easy-to-use, advanced features to our Pixelmator fans and continue to create the best and most enjoyable image editing experience,” Saulius Dailide of the Pixelmator Team said on their blog, “With new state-of-the-art Smart Shape Tools, people can fully enhance their images, create logos, Web layouts, posters, and much more, all easier than ever before.”

Pixelmator 2.2 is now available in the Map App Store for free for anyone who has already purchased the App. If you’re interested in it for the first time, you can get Pixelmator for $14.99