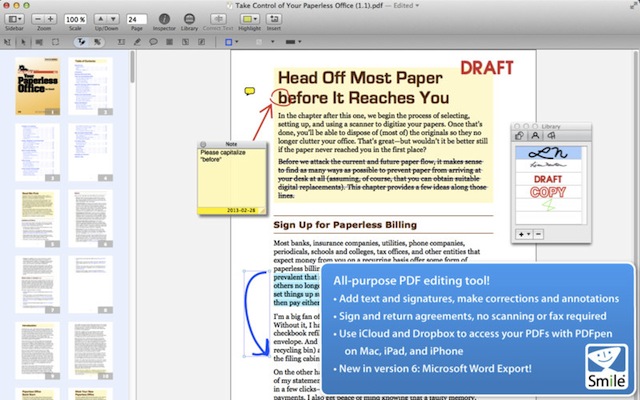 Smile announced recently on its company blog that the award-winning PDFpen 6 and PDFpenPro for Mac has been released with special pricing for the first 48 hours. The popular app lets you edit PDF documents by adding signatures, correcting text, ticking boxes and more.

The new version of PDFpen has a lot of new features:

To celebrate its release, Smile Software is offering a special discounted price on the app. The company also wants to address those who’ve bought previous versions from the Mac App Store, since the store doesn’t allow upgrade pricing.

Smile’s policy has always been to offer current users an upgrade path when a new version becomes available. Since PDFpen is available in both the Smile Store and on the Mac App Store, upgrades can be a little tricky.

There’s no way to offer upgrades in the Mac App Store, so to accomdate customers who want to buy the Mac App Store version, Smile is offering special pricing for the first 48 hours. PDFpen will be $29.99 and PDFpenPro will be $39.99. The special discount will end on March 20 at midnight PDT.