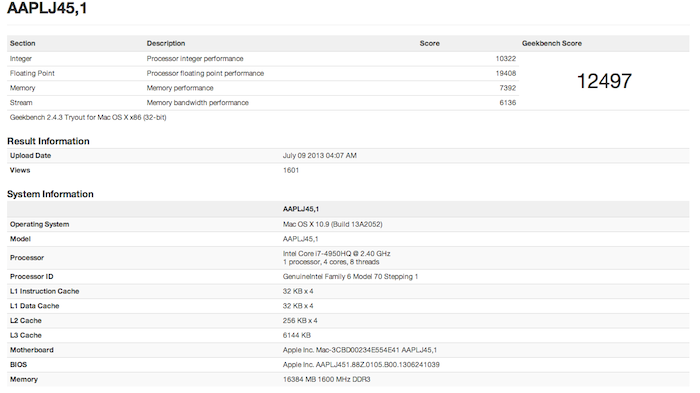 Benchmarks for the next-generation 15-inch MacBook Pro have popped up over at Geekbench. This MacBook has been given the code name of “AAPLJ45,1” and has received an overall Geekbench score of 12497. According to the benchmark, the laptop features a quad-core Intel Core i7-495HQ clocked at 2.4GHz and 16GB of 1600MHz DDR3 RAM. The computer is also sporting a custom build of OS X Mavericks with the build name “13A2052”.

As of now, we’re not sure what the graphics situation is with the new 15-inch MacBook Pro. Current generations of the MacBook Pro include high-end AMD 650M graphics chips that are a massive step up from Intel’s built-in HD Graphics 4000. However, with the latest generation of Intel CPUs, we’ve seen the company double the power of its integrated graphics with Iris 5200 that is included with the Core i7-495HQ.